The WRC series on Switch feels to us a bit like a hammer made of sponge. We appreciate the effort that went into it and it sort of looks like the real thing, but it never really properly nails it.

After getting off to a rocky start with WRC 8 on the Switch then delivering a slightly improved but still shonky sequel, the series is back with its tenth entry and, once again, it’s a little better without being overwhelmingly brilliant.

On the road, it’s business as usual. As a serious rally simulation, WRC 10 is not the sort of game where you can jump in for the first time and instantly start swinging your car around as if Sega Rally itself had risen from its grave. If you’re new to the series, expect to do badly for a while.

This is a game where your driving skills have to be exceptional, and you’re punished without pity if they aren’t. The slightest clip of an object at the side of the road will send you spinning or tumbling, and any oversteer on sharp bends can have you skidding uncontrollably.

The latter can be eased a little by heading into the options and reassigning the acceleration and brake controls. By default these are mapped to ZR and ZL respectively, but because these aren’t analogue triggers they lack the nuance needed for some of the corners in a serious rally game. 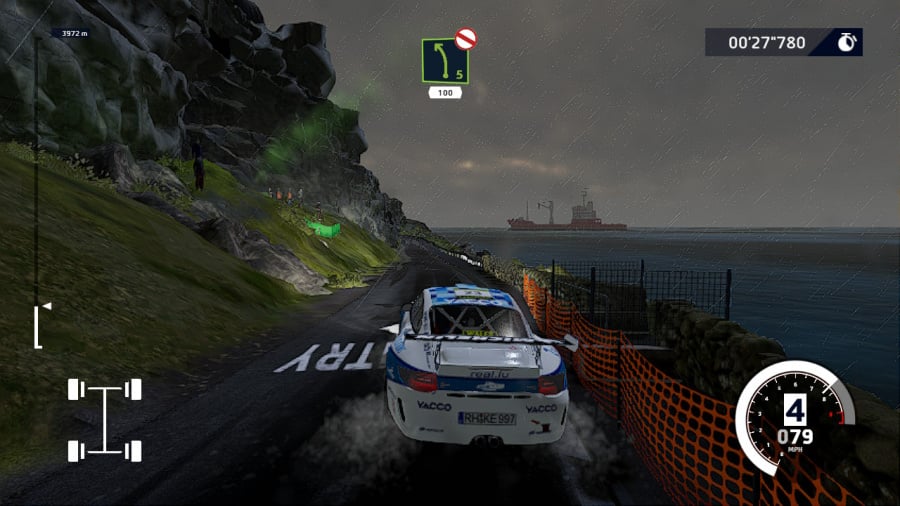 By mapping them to the right analogue stick instead and playing with a twin-stick control method, players can get much better control over acceleration and braking, making it easier to navigate tricky corners without spinning out. To do this, though, you also have to deactivate the ability to turn the camera around with the right stick. Look, it’s a whole thing.

The slippery handling combined with the game’s exceptionally long courses means there’s quite a difficulty curve, then, and there’ll be plenty of moments where you’ll be turning the air bluer than Colin McRae’s Subaru Impreza when you hit a ditch seven minutes into a run and tumble backside over bonnet.

Once you eventually get the hang of things – which, like we say, can take a while – you’ll find that WRC can be extremely satisfying. When you start finally putting in reasonable times that challenge those of your competitors, you really do feel like you’ve accomplished something.

There’s one thing that really can’t be ignored, though, and if you’ve been perceptive while scrolling through this review you might have already noticed it. As in previous years, this is not an attractive game. In fact, while we played it we kept saying to ourselves: “I remember last year’s one looked bad, but did it actually look this bad?” 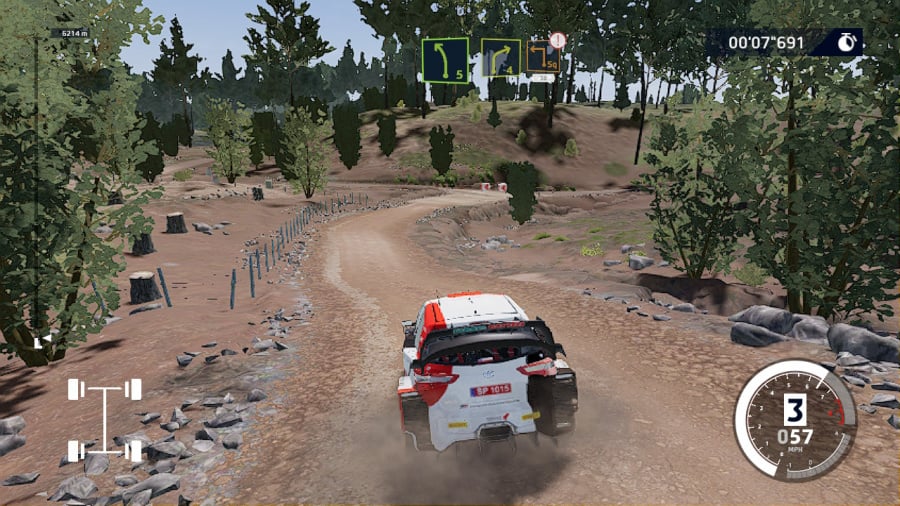 Sure enough, we re-downloaded WRC 9 and captured some screens from that, then matched the car, track, turn and weather in WRC 10, and in the handful of situations we tested, WRC 10 looks noticeably worse than its already ugly predecessor.

Quite why this is the case isn’t really clear. Perhaps the graphical detail was dialled back even further in an attempt to improve performance, but whatever the reason there does appear to be a visual downgrade here. We’d need to spend a lot more time running comparisons to say this definitively, but based on our own brief tests that certainly seems to be the case.

In docked mode it just about passes for acceptable, but play the game in handheld mode and the graphical issues are so severe that they provide a huge distraction while driving. Not only is the frame rate rougher than a cheese grater made of sandpaper, it’s also hard to concentrate on a crucial, lengthy run when trees and other scenery are appearing 10 feet in front of you as if there’s a glitch in the Matrix and it’s constantly trying to catch up with you. 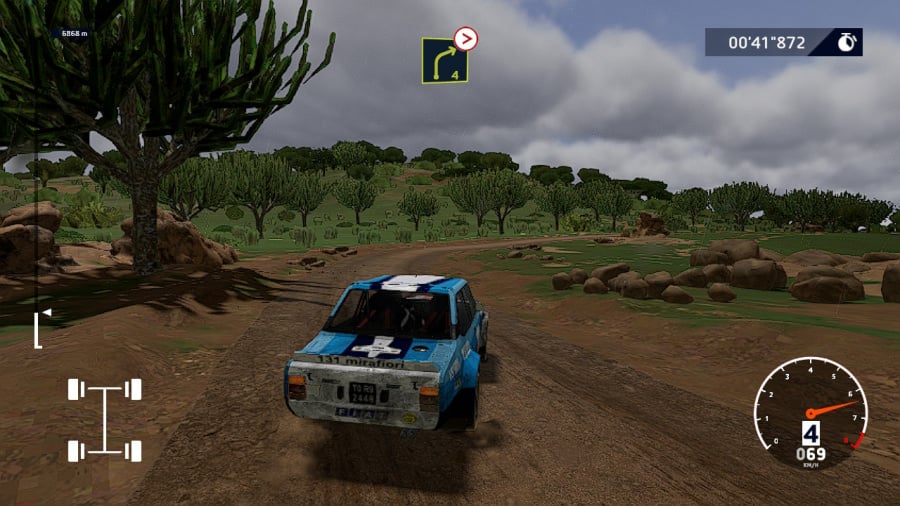 If you can put up with a game whose environments are almost always grossly underwhelming, there’s actually a lot more on offer here than last year’s game, which itself was already pretty stacked with content. As well as the return of the in-depth career mode (which has barely changed much) there’s also a brand new mode celebrating the 50th anniversary of the World Rally Championship, which lets you take on a series of classic courses from different key years in the sport’s history.

Naturally, rally nerds are going to get the most out of this feature, and if the thought of driving round the 1974 Sanremo track or taking on part of the 1992 New Zealand rally has you dribbling in your driving overalls, you’re in for an absolute treat here. Even if you don’t have such a strong affinity for the sport and the words ‘Finland 1981’ and ‘Sweden 2004’ might as well be Eurovision events to you, the fact that this mode significantly increases the total number of tracks is still cause for celebration.

Last year’s games featured a total of 107 courses, taking in 13 locations. This time, with all the real 2021 WRC stages, plus bonus Belgium and Wales stages from older games, plus all the anniversary content, you’re looking at a massive 142 courses spread across 19 locations. Given that so many of these courses are extremely long given the nature of the sport that means there must be over 1000km of track in there. 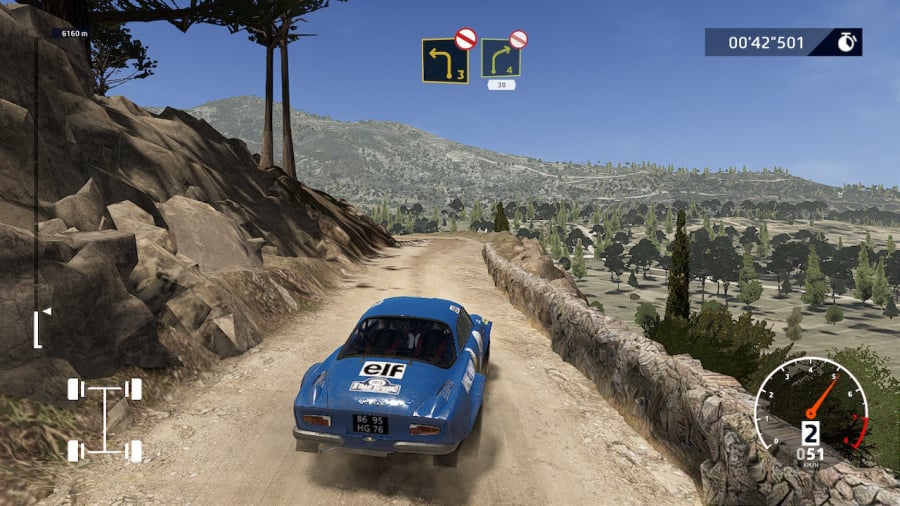 This extends to the cars, too. Whereas WRC 9 featured a total of 22 different models covering a mixture of modern and classic vehicles, the extended focus on the history of the sport this time around means even more legendary cars are available to drive, bringing the total number to 35. So if you really do want to pretend it’s Sega Rally, you can now bust out the ‘90s era Toyota Celica GT-Four and shout “LONG EASY RIGHT MAYBE” at the screen. Except Sega Rally probably looked better, to be fair.

WRC 10 contains significantly more content than its already packed predecessor, and can provide extremely satisfying rally gameplay once you get used to its (accurately) unforgiving handling. This is let down, however, by the game’s visuals, which are tolerable while docked but look awful when playing in handheld. As long as you can put up with how it looks, there should be enough here to keep you busy for months.