The world is a dangerous place. One minute you’re out in your fields, farming to provide food for yourself and your wife, and the next you’re being accosted by a gang of monster girls who are dead set on stealing you away for themselves. That’s the fate of poor Fernando, who gets himself snatched away from his bed in the middle of the night. It is up to his loyal and incredibly protective wife, Mia, to rescue him.

She is his wife, and this is her quest, hence the name of the game. Wife Quest doesn’t want you to take its premise seriously. Ignore the fact that Fernando appears to be the only man in the entire nation. Don’t worry about the death and destruction that Mia leaves in her wake as she attempts to rescue him, despite being repeatedly assured that he is in no real danger. Wife Quest is not trying to be serious, and it makes that clear from the start.

Unlike her husband, Mia seems to be perfectly capable of taking care of herself. Starting with just a sword and a long list of insults for the various monster girls that she finds with Fernando, she gains powers and abilities to help her either traverse the world or kill monsters more effectively. In classic Metroidvania style, many areas of early levels are closed off until you get the power-ups and abilities gained from later bosses, giving completionists plenty to come back for once the game is finished. Or players can go ahead and complete the game to unlock Magic Mode, which offers a second playthrough with all of Mia’s abilities and unlimited magic. 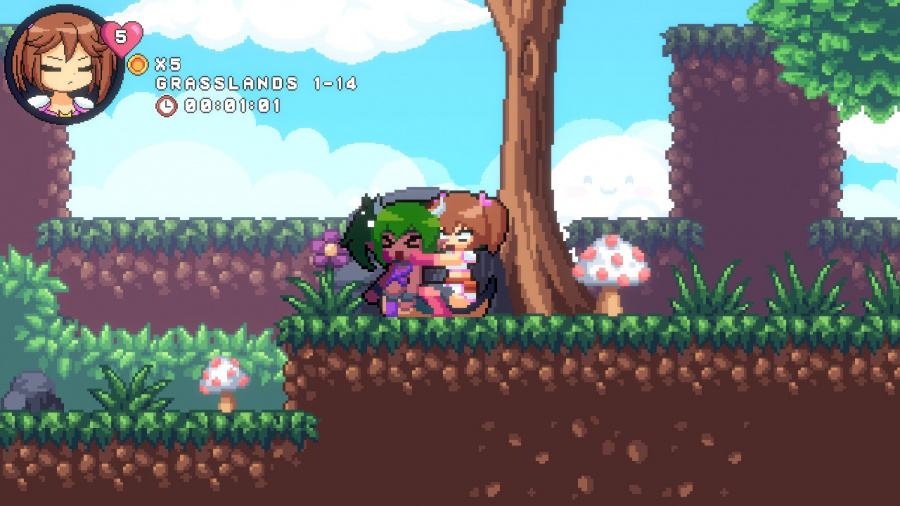 Developed by Pippin Games and published for the Switch by eastasiasoft, Wife Quest is a fun game with a lot going for it. The pixel art feels both retro and modern, with bright colours whether you play in docked or handheld mode. Each enemy is immediately recognisable and unique, with a lot of character and variety in their sprites. Even though many of them feel like palette swaps of earlier monsters at first glance, there is just enough difference in how they play to keep them from becoming repetitive.

There are lots of little touches that breathe extra life into the character of Mia as she rampages across the small continent where the game takes place. Like how her portrait in the corner changes when she attacks or takes damage or how her sword changes colour with each new power-up purchased for it. These little touches elevate the game and make playing through it a charming experience.

Though the game bills itself as “humorous and often naughty”, this is not the lewdest game in the eastasiasoft catalogue by a long shot. While the monsters have a healthy amount of jiggle physics on display and there is the implication of something unseemly happening between them and Fernando, the pixelated art feels more like a Saturday morning cartoon than anything that would make players blush. It certainly leans more toward the humorous than the naughty, much to its credit. 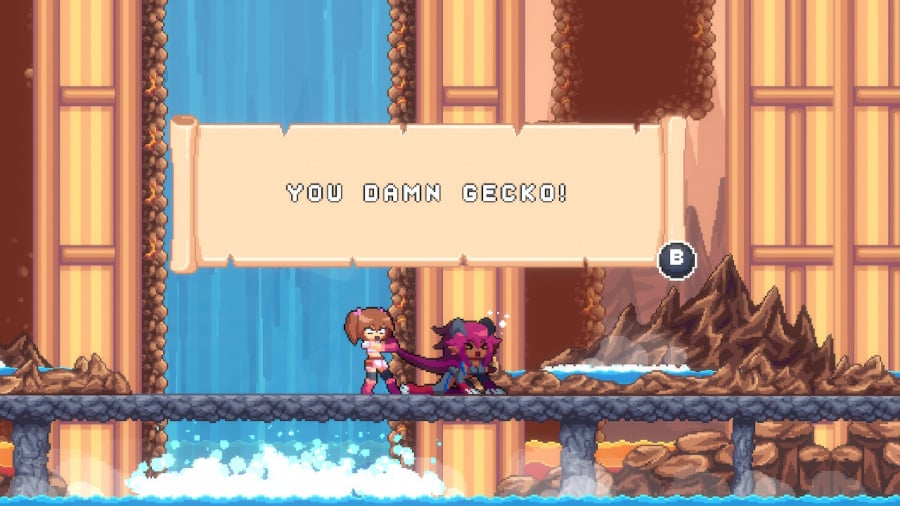 The gameplay is deceptively simple at times, with the bulk of it being a 2D platformer with enemies scattered around to complicate things in Mia’s journey. The trick here is how well-balanced each level feels. Many of the sections feel difficult but never impossible. A path to victory is always within sight and it just takes a bit more practice or slightly better timing to make it across that pit or that river of lava. Mia will die often and in a variety of painful ways as she makes her way through the level, but the punishment for failure is neither so unfair that it becomes frustrating nor so light that it is hardly a punishment at all. It is a well-put-together game; save for a few visual glitches during the final boss fight (which were more annoying than hindering), we didn’t run into any problems while playing it.

When Mia does manage to make it through to the end of each level, she is confronted with the sight of the resident monster girl making the moves on her man. Fernando, for his part, doesn’t seem to be resisting quite as much as he should be, but he also makes it very clear that he only has eyes for his wife. While it is clear that Mia is the brawn in the relationship, it is a bit worrying that he spends one boss fight sitting in a hot tub watching the action take place.

After a bit of banter back and forth, usually with the boss monster making light of Mia’s figure and Mia resorting to name-calling, the boss fight of the dungeon commences. These fights always feel more difficult than they really are. Once we learned their pattern and, more importantly, came to grips with the fact that Mia gets stuck in her animation cycle for a bit longer than we would have liked, none of the bosses are insurmountable. Again, there is a beauty in the balance of these fights. They never feel impossible, merely difficult. 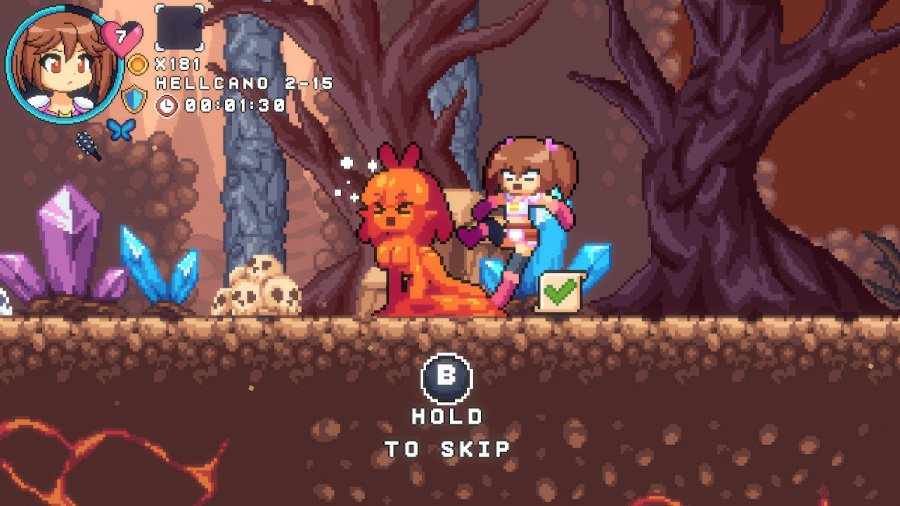 After each level, Mia gains a new power. For example, her gliding ability makes it much easier to get around and avoid the various traps in an area, and she unlocks this ability by literally ripping the wings off the first boss’ back and wearing them herself. It is a brutal display, even in the gore-free art style of the game. Mia is clearly not a woman to be trifled with, and we respect that.

That same brutality is extended to the regular enemies in the game; after defeating them, players have the option to dispatch them quickly and permanently as they lie on the ground. Doing so has little mechanical benefit, but it does unlock a unique animation for each type of enemy that can be viewed later. These animations are accompanied by slightly questionable sound effects and movements that might make someone passing by the room raise an eyebrow, but the game doesn’t linger on these moments for long. This is the closest the game gets to “naughty”, until some more fan-service heavy moments in the closing cutscene.

It took us around 10 hours to complete our first playthrough of Wife Quest, which is not a bad run considering the low entry price. There is a lot of personality and style on display here, and players who want to go for all the trophies in the game will have plenty to come back to. Save for a few small visual hiccups and the fact that the game’s humour is often an acquired taste, there isn’t really a lot to pick fault with here; it’s fun, short, and well-balanced enough to keep it from ever becoming overwhelmingly difficult. While it’s not quite in the same league as the likes of Hollow Knight and Axiom Verge, if you’re a fan of Metroidvania titles, then Wife Quest is yet another title worth checking out on Switch.