A small “Powered by Arcade Archives” message sits in the corner of Taito Milestones‘ dual-purpose title/game select screen, a subdued seal of quality there to let players know the emulation within is of the same standard we’ve come to expect from Hamster’s prolific series, with all the usual features (and even the exact same interface) present and correct. What this means in practice is the digital recreations of arcade classics found here sit somewhere in the middle ground between the extravagance (and expense) of M2’s extraordinary work and the less desirable ‘It mostly functions as it should’ efforts of old; quietly reliable releases where the games themselves are always the main attraction.

So it’s a good thing the ten titles selected for this collection cover an impressive range of genres, offering everything from scrolling beat ’em ups and single-screen platformers to good old fashioned sci-fi shooting and abstract territory snatch ’em ups. There’s definitely something here for everyone (so long as they have a taste for the ’80s) no matter what their mood, the arcade origins of these titles naturally making quick casual bursts of play effortlessly enjoyable. Anyone hoping to spend longer with an old favourite will be pleased to hear every game supports online leaderboards, so if you can crush everyone at Alpine Ski or have dedicated your life to mastering The Fairyland Story then you can finally show off your awesome skills to the entire world. Those with an eye for detail can spend their time marvelling at The Ninja Warriors specialist screen options, beautifully preserving the game’s three monitor’s worth of widescreen display with settings that go above and beyond scanlines and resizing, aiming instead to echo the more honest (if disjointed) extended monitor/mirror setup of the original arcade cabinet, complete with optional offset screens and mismatched tinting. 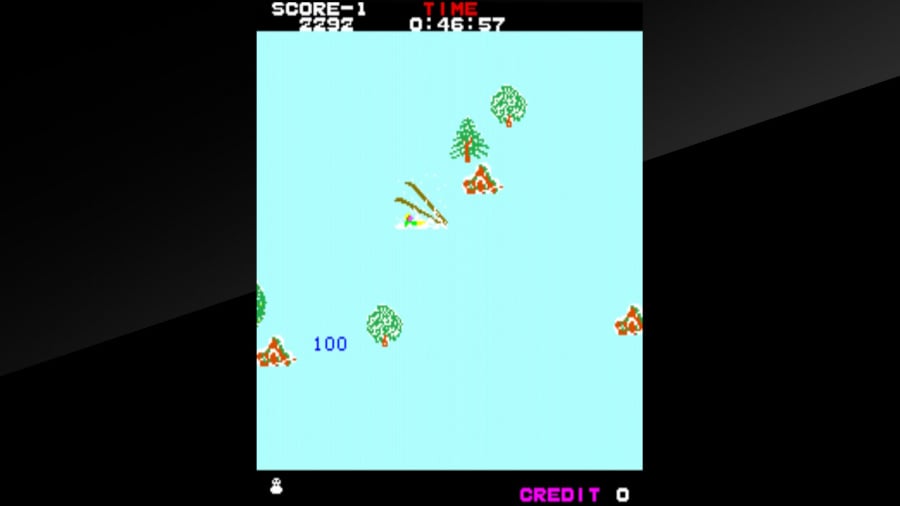 As pleasant as that sounds, Taito Milestones suffers from an inescapable problem; anyone with an interest in the games named above will already know they have these features, as they’ve all been available to buy separately on the eShop since at least 2020. In fact, seven of the included ten games are already available to buy separately on the eShop no matter where you live: Alpine Ski, Elevator Action, Wild Western, Front Line, The Fairyland Story, Halley’s Comet, and The Ninja Warriors are all Taito milestones you can buy right now from the comfort of your Switch, tailoring your Nintendo-based classic arcade gaming experience to more precisely suit your own budget and tastes. The three exclusives — assuming they aren’t also released separately at a later date — are Qix, Space Seeker, and Chack’n Pop. Even if you are one of the few who consider those three essential purchases that nobody should live without (the Qix fans amongst us are happy to admit a ‘There are dozens of us!‘ GIF might be grossly overestimating our numbers), that’s still a slender selection of fresh re-releases for a premium-priced pack, soundly outdone by more generous Taito collections available for older hardware.

Why are these games milestones in Taito’s history, anyway? Sadly this collection doesn’t tell us, as the package includes no context, no fascinating snippets of arcade history, fun facts, or even a simple gallery of arcade flyers to ogle at our leisure. Something as basic as the reason why The Ninja Warriors uses such an odd widescreen display is left to a simple text box in the game’s settings menu to explain, without any reference to other games that used the same setup or why it was so eye-catching at the time. There are no features or extras to help you better understand why these games – some of them almost four decades old now – are still worth playing today; the included digital manuals more concerned with basic instruction than why Monsta and Mighta’s appearances in Chack’n Pop hold any historical significance. Sol Cresta‘s DLC database includes more arcade history than this does, and that’s a brand new shmup merely referencing an older series, rather than a dedicated retro collection. 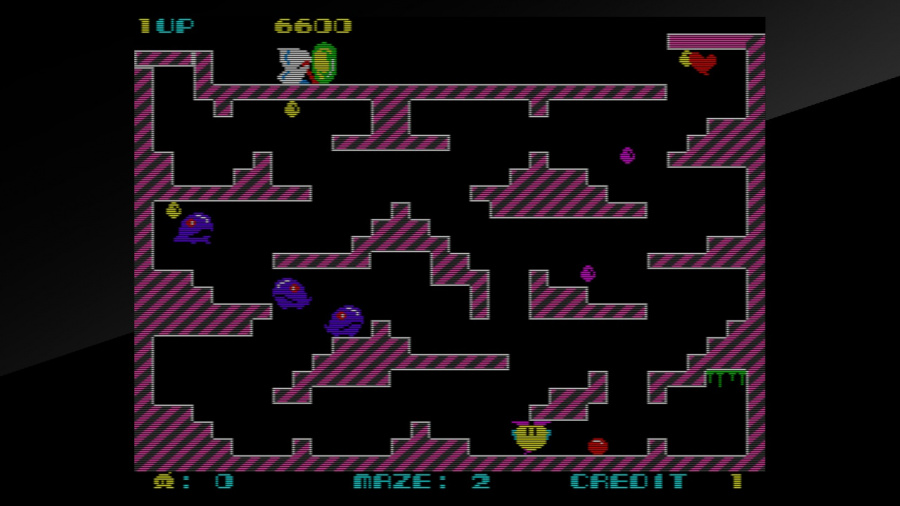 And if you don’t need that information because you know all about Taito’s influential past, then the holes in this pack feel frustratingly obvious: Where’s Space Invaders, the arcade hit so successful it shaped all of gaming, with the aftershocks of its revolutionary ideas still felt today? How is that not worthy of being a ‘Taito Milestone’? The uncomfortable fact is it’s not here because it’s already included in Space Invaders Invincible Collection, so you need to buy that as well. Exciting series-spawning fish ’em up Darius is missing for similar reasons — why would they give it away here when you can shell out (no pun intended) for the Cozmic Collection instead?

The bold title only invites questions and criticism, much of which could have been avoided if it had been called ‘Taito Early Collection’ or ‘Taito ’80s Pack’, an avoidable own goal that only makes you realise how miserly this bundle is, its slim pickings not even including every relevant Taito game already Arcade Archived and ready to buy (The Legend of Kage, Raimais, and Kiki Kaikai are conspicuously absent), never mind the likes of Bubble Bobble, Rainbow Islands, Arkanoid, The New Zealand Story or 1985 LaserDisc showstopper Time Gal – a game that was ported to iOS/Android a few years ago and then consistently left off every arcade re-release schedule since.

There may not be many games in here, but they do cover a broad range of genres and most of them are still great fun to play today. It’s just a shame Switch owners have already had access to the majority of them, with the exact same features, for years already. The glaring lack of any extra features make it hard to appreciate the significance of the more obscure or basic titles unless you’re prepared to go off and do some homework, and there are some very obvious milestones missing for no reason other than it allows Taito to make more money by splitting the games across multiple collections.