PlatinumGames, perhaps best known for the Bayonetta series, is an odd fit for a sequel to a shoot-em-up series that began in 1980 as a Galaxian hack. Moon Cresta, by Nichibitsu, introduced a ‘docking’ system that would power up the craft after four alien attack waves. It was a novel idea at the time, and landed well with arcade audiences.

The 1985 sequel, Terra Cresta, is where Platinum’s effort borrows most of its design basics, including enemies, bosses and bullet spreads. Moving into full vertical-scrolling territory, Terra Cresta allowed the player to collect ship add-ons to increase their firepower, and then split those parts into formations for broader weapon coverage. It also featured ground-based enemies to destroy, some of whom — such as its dinosaurs — have made it wholesale into Sol Cresta.

The first thing that strikes you about Sol Cresta, is that it’s stunningly horrible-looking: a kind of mashed together, multimedia vomit of late-’90s freeware renders. Entirely disorderly, its backgrounds and HUD periphery are a masterpiece of incoherency. A game where ground and air targets need dispatching simultaneously, it can be confusing to focus on the threats, and almost impossible at first glance to discern obstacles you can crash into from those you can fly over. The frame rate seems a bit slow, too, even when docked; and while it doesn’t have a huge impact on the way it plays, it’s somewhat bizarre Platinum couldn’t clean it up a bit. 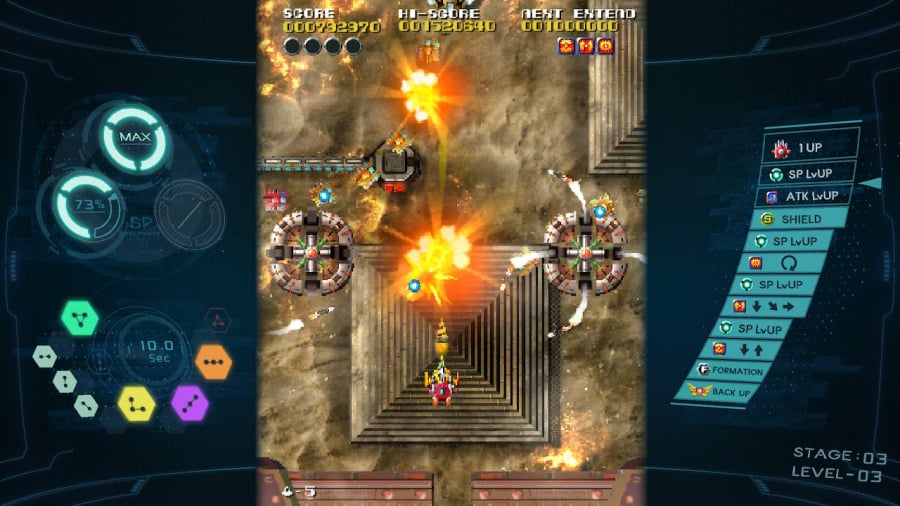 Someone seemed to think the game would benefit from a scanline filter to make the visuals more bearable, but in an epic misstep the filter actually makes the game borderline unplayable at any of its offered intensities. Imagine a broken CRT monitor with a failing tube and vaseline smeared all over the glass, resulting in a blurring of detail to the point where it becomes a handicap.

Where Sol Cresta does excel — arguably more than in any other area — is in its audio. The soundtrack has a very well-defined, old-school arcade feel; a wonderful blend of chords and score bonus ditties that perfectly capture their inspirations. It’s so accomplished aurally, that composer Yuzo Koshiro undoubtedly understood the game’s brief a lot better than the visual department.

Aesthetics, however, do not maketh the game, and Sol Cresta most certainly plays better than it looks. The horror of thinking you had fired up some random indie mobile phone port — which is very much what it initially resembles — fades after you get to grips with its system and focus on what it offers in shooting action adventure. 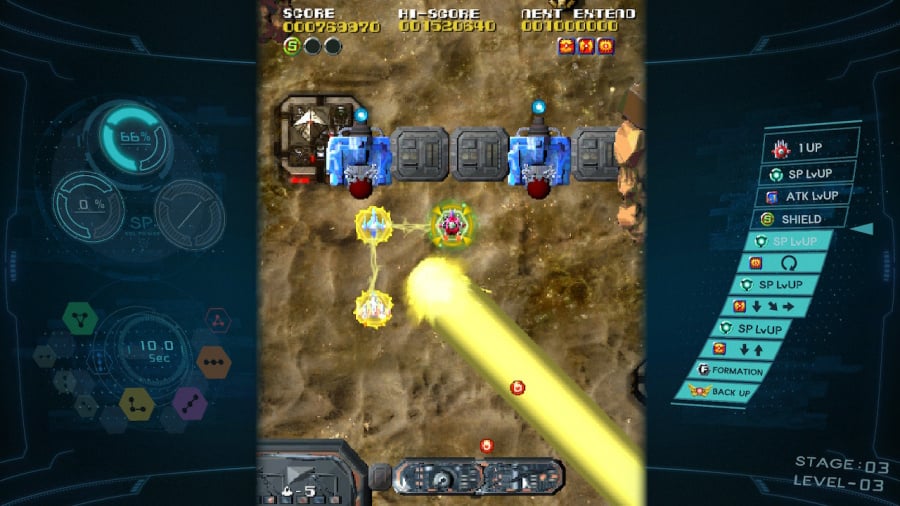 The series’ ideas of ship docking and formations has been greatly evolved. Now, you can collect three independent ships, tethered by sci-fi electrical wire, and bolt them together in a variety of different ways. Clearly delineated by red, blue and yellow, placing different ships at the head of the stack changes your attacks. This gives you a whole host of weapon options to toy with, from spread shots to homing missiles, as well as chargeable laser blasts and powerful drill bits. The game has an interesting economy here, although it does little from its outset to wean you into using any specific formation with a distinct purpose. There are also Street Fighter-style move inputs, such as quarter-circle and 360 degree rotations that can trigger bullet tricks — but in the heat of things it’s easy to forget they exist, let alone have an opportunity to put them into effective practice.

Once you get a handle on the core mechanics there’s less flailing involved. The game’s major device is in collecting icons with pattern formations that allow you to lock your craft into powerful three-pronged arrangements. Collect the downward triangle icon, for example, and you can drag the craft into the same pattern to spew a broad wave of deadly fire. If you manage to obtain all the formation icons in a stage, you can transform into a flaming Phoenix (another Terra Cresta nod) for a completely invincible and highly devastating period. Unfortunately, the Phoenix falls foul to an embarrassing programming error whereby if you fly it at a boss it ends up hidden beneath the sprite layer, almost always killing the player when the transformation reverts. 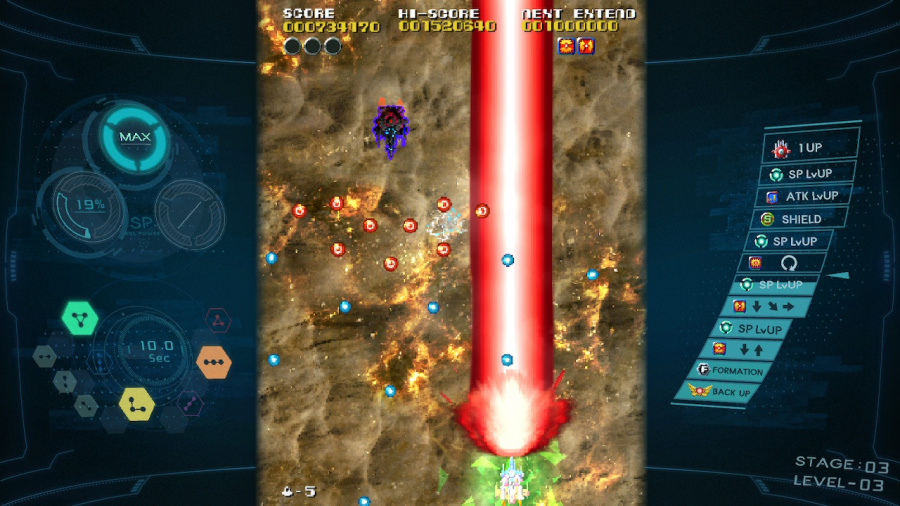 All powered-up formations are transient, reliant on building an SP gauge through collecting coins, medals, and destroying enemies. When your gauge has enough stock, you can trigger a formation of your choosing for a limited spell, before you return to your normal state. Cleverly, when detaching your ships, the game slows right down, allowing you time to drag your craft into your desired shape; but if all three ships are destroyed, a life is lost.

Sol Cresta offers no continues, which is a good thing, but does allow you to restart from any previously cleared stage. At first it seems overly-tough because of so many elements operating in tandem, not helped by its graphical hash and emphasis on formation fiddling. In actuality, it’s not that difficult at all, with extended survival depending largely on how much stuff you can grab. Shields, ship replacements, points bonuses, and point-based life extensions rain down to keep you in the game. Utilising different ships to open colour-coded boxes and achieve maximum bonuses from circular gates is a smart way to engage the player and force you to constantly use the formation juggling mechanic. By only our fourth go, utilising everything at our disposal, we made it to the end of the fifth (of seven) stages on a single run, proving it’s far less aggressive than it first seems. It would have been nice to upload our score to an online leaderboard — something even indie shmups like Raging Blasters include — but the option wasn’t present (at least in our review copy). 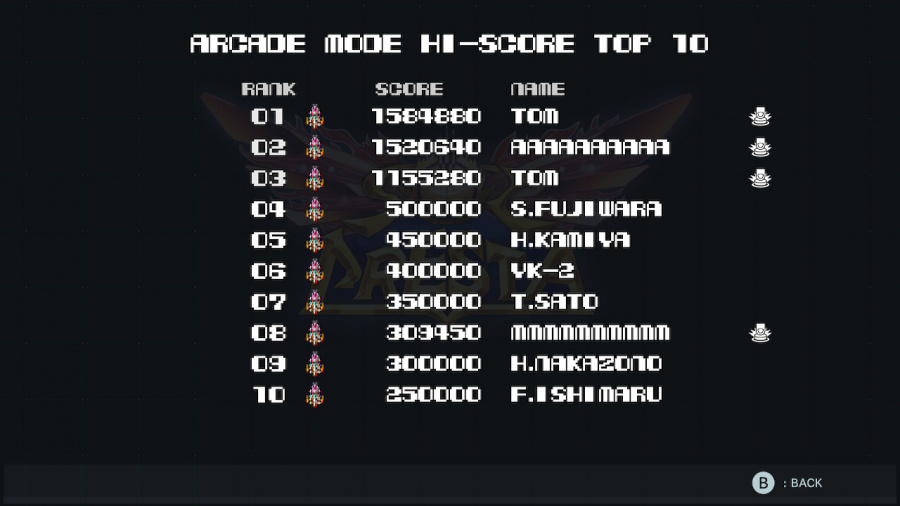 It’s important to note, particularly where shoot-em-ups are concerned, that learning by repetition is a major part of the enjoyment factor, and knowing how to juggle Sol Cresta’s system certainly fosters a sense of accomplishment.

At the same time, it’s a game that feels unnecessarily untidy and unrefined. Despite touting a nuanced power-up system, even after extended play you aren’t sure where its specific advantages lie in relation to dispatching your enemies — and dodging has a critical imprecision about it. It feels as though Platinum wasn’t quite sure how to balance out the old with the new, faltered somewhere in the middle, and decided not to rethink or overhaul it in any way.

There’s a nagging feeling that Platinum — with all its talk of getting back to old school gaming — might just be cash-grabbing here, leveraging their association with the likes of Bayonetta to accrue early sales in a genre that’s been privy to renewed interest. Sol Cresta far from unenjoyable, but for some it may be slightly unpalatable. If you’re not willing to really communicate with its ship formation assemblies and oft-repeated bosses (albeit with powered up attacks) it’s difficult to click with. Or, to frame it more clinically, you might well feel that there are other shoot-em-ups you would rather be playing instead.

If you’re a fan of this now very old series, you might find Sol Cresta’s mould appealing. It’s certainly fun to improve, win shields, and prolong your survival by grabbing back lost ships; and to be able to whip your craft into formation and quickly destroy bosses with a countdown of powerful ordnance — and the audio is sublime. At the same time, with all of its interesting ideas, one can’t help but feel that there are elements here that need more polish and careful implementation. There are very few memorable boss attacks, and while some stage junctures are somewhat shrewd, others come off as ill-conceived or uninspired. By no means is that to say it’s unenjoyable — there is a definite groove within its visual mess that becomes clearer over time as you chip away at the interesting core gameplay — but the fact of the matter is that Sol Cresta is up against a wealth of extremely steep competition, and to stand out it needs to be hitting the all-important notes with greater finesse.