Welcome to Atlus, Switch fans, the company that really doesn’t want you to play any mainline Persona games, but does want you to play their canon sequels. Last year, we got Persona 5 Strikers, a surprisingly great Warriors-style follow up to the seminal Persona 5. This year, we’re getting Persona 4 Arena Ultimax, a *checks notes* remaster of a fighting game that serves as a sequel to both Persona 3 and Persona 4. As oddly positioned as this project may feel, we’re happy to report that Persona 4 Arena Ultimax proves itself to be a competent fighter on Switch, one that we think will appeal both to fans of the Persona brand and to fighting game newcomers.

First off, let’s recap what’s all included here. Persona 4 Arena Ultimax packs in quite a lot of content, featuring the stories of both the original P4A and P4AU alongside all the DLC from across those two games. This means that all the additional fighters, a staggering amount of cosmetic options for each of them, and an additional story mode have all been thrown in. Behind the scenes, this is also including all of the ‘2.5’ content from the Japanese exclusive arcade release of P4AU, which integrated a bunch of balancing changes to make for an overall better feeling experience. In short, this is the most feature-rich version of P4AU yet, and it all comes now with the benefit of being portable. 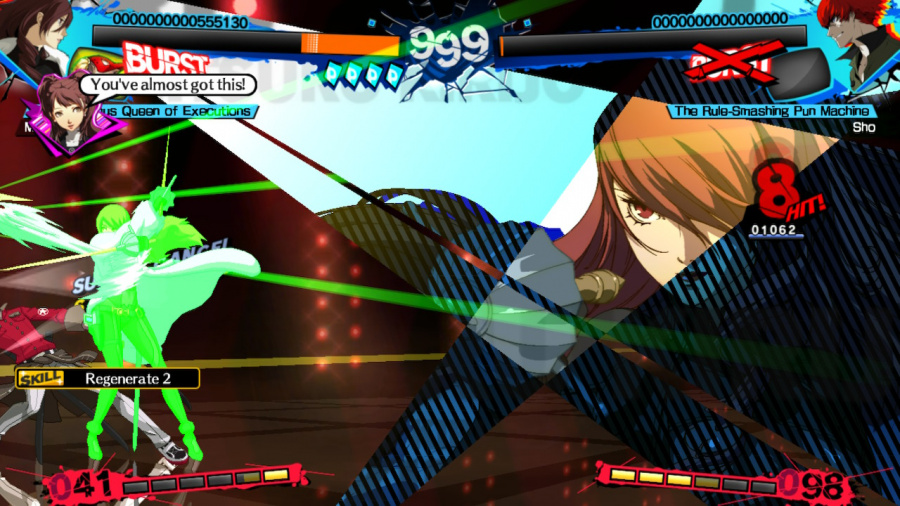 In the story mode, P4AU primarily follows the members of the Investigation Team a few months after the events of Persona 4 with the gang all getting back together in Inaba for Golden Week. Conveniently, the Midnight Channel has returned at the same time, and is now broadcasting a mysterious P-1 Grand Prix that seems to be hosted by a version of their friend Teddie. After a few members of the team go missing, the remaining members opt to step back into the world in the TV to join the competition in the hopes of finding their lost friends and getting to the bottom of what’s going on.

For a fighting game, the story here feels fine, but it suffers from some absolutely glacial pacing. Whereas the rich narrative of a typical Persona game is frequently punctuated by dungeon runs, school trips, and social outings, there is no such content to break up the verbose monotony here. The story is exclusively delivered to you via visual novel-esque static screens where characters read their lines, sometimes for 10-15 minutes at a time, before you finally get to pick up the controller and fight in a battle.

After the three minutes it takes for the fight to be over, you then get thrown back into another lengthy expository sequence and the cycle repeats. This would be bad enough on its own, but things are exacerbated by the fact that there are multiple routes to take through the story, with each taking the perspective of a different character. This means that you’re frequently retreading the same ground again, only you’re privy to someone else’s thoughts for this scene instead. 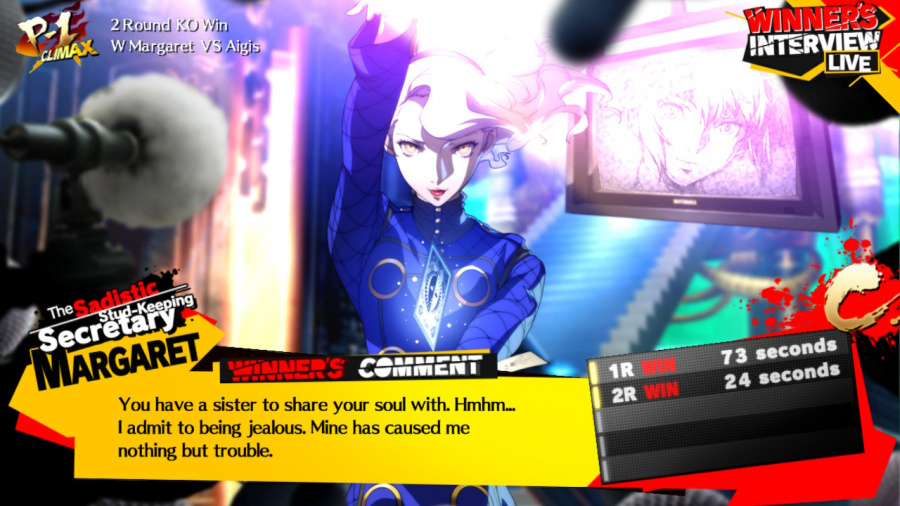 All of this is to say that the lack of adequate gameplay elements in the story mode makes it a true test of one’s endurance. Mashing ‘A’ through half an hour of dialogue doesn’t make the quick battle at the end of that gauntlet feel exciting—it feels exhausting. And while the plot itself does eventually develop into something mildly interesting, it’s consistently dragged down by entirely useless scenes that just pad out the runtime. Characters will take their sweet time to talk about whatever they’re talking about — they’ll spend several minutes reflecting on where they’re about to go before they actually go there. There’s probably five hours of actual plot in here, yet it will take you thirty hours to get through it. All that fluff might be a little more forgivable in the context of an RPG where you have lots of things to do around it, but it simply doesn’t work in a fighting game.

Luckily, the actual fighting game parts of P4AU are excellent; Arc System Works certainly didn’t disappoint in delivering an approachable take on 2D fighting with a ridiculously high skill ceiling. There are 22 fighters to choose from here, consisting of some newcomers and the casts of both Persona 3 and 4. Most of them also have a ‘Shadow’ version available that bumps that number even higher, all but guaranteeing that there’s a fighter for every playstyle available. Whether you like to focus more on grapple attacks or on zoning, it seems like everybody fills a proper niche in the lineup and has their own distinct feel.

A character’s moveset usually incorporates a mixture of light and heavy attacks, throws, grabs, and special attacks, adding up to make for a dizzying array of ways to approach a battle. Beginners aren’t tossed right into the fire, however, as there’s a decently informative practice mode that teaches you the basics of controls. If you still can’t grasp the finer points of setting up combos, there’s even the option to simply mash ‘Y’ repeatedly to pull off a modest combo that at least makes you feel like you know what you’re doing. P4AU may not feel nearly as approachable as, say, Super Smash Bros., but we felt that it provided enough accessibility that even someone with no experience with a fighting game could have quite a bit of fun with it. 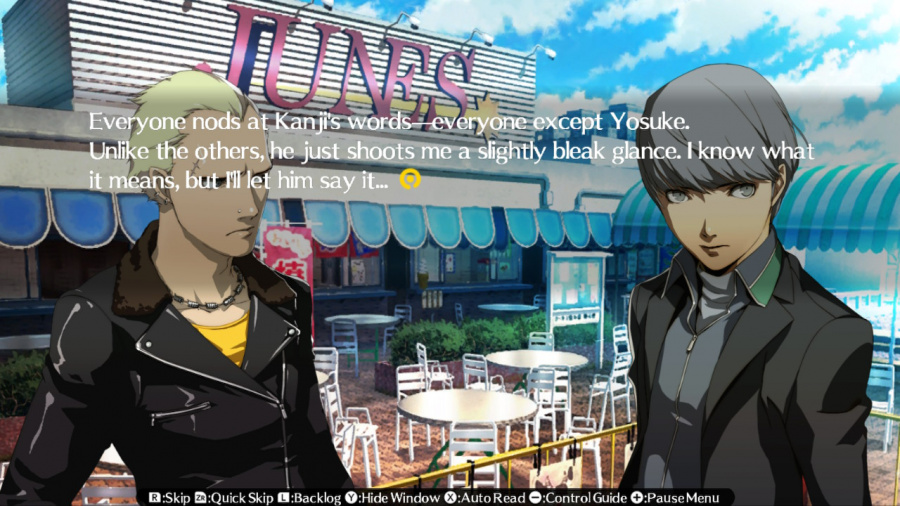 And for those of you that are more experienced, it feels like there are near limitless options for thrashing your opponent about. Guard Counters, Persona Breaks, Reversals Bursts, and many other fancy sounding techniques ensure that there is always something more you could be doing to better optimize your offensive or defensive actions. What’s nice about all this is that you know for a fact that you could play P4AU for dozens of hours and still not feel like you’ve completely gotten a handle on all its nuance. It doesn’t mean that you’re not getting a ‘full’ experience if you can’t or won’t take advantage of all these techniques, but there’s nearly endless potential for honing your mastery here. If you’re the kind of player who revels in pushing the limits of your dexterity, P4AU will prove itself to be more than worthy of your skills.

Those of you who want a gameplay experience more akin to the mainline games will probably gravitate towards Golden Mode, which sprinkles in some RPG elements and even social links to the base fighting gameplay. In Golden Mode, you level characters individually by clearing hundreds of ‘floors’ of a dungeon. Every floor will present you with a new fighter with their own slightly modified stats and abilities, and you’ll gain experience for each victory you manage. At each level up, you can then distribute stat points to buff up things like your attack damage and Burst gauge, and you’ll learn new active and passive skills that give you a helpful edge in the heat of battle. While Golden Mode doesn’t massively shake up the core idea of 2D fighting gameplay, we appreciated this cool approach to making P4AU feel a bit more like a single-player RPG. If nothing else, Golden Mode feels like a suitable answer to the text-heavy story mode; if you don’t want to deal with the ridiculously long cutscenes there, you can find more than enough single player content to keep you happy for quite some time here. 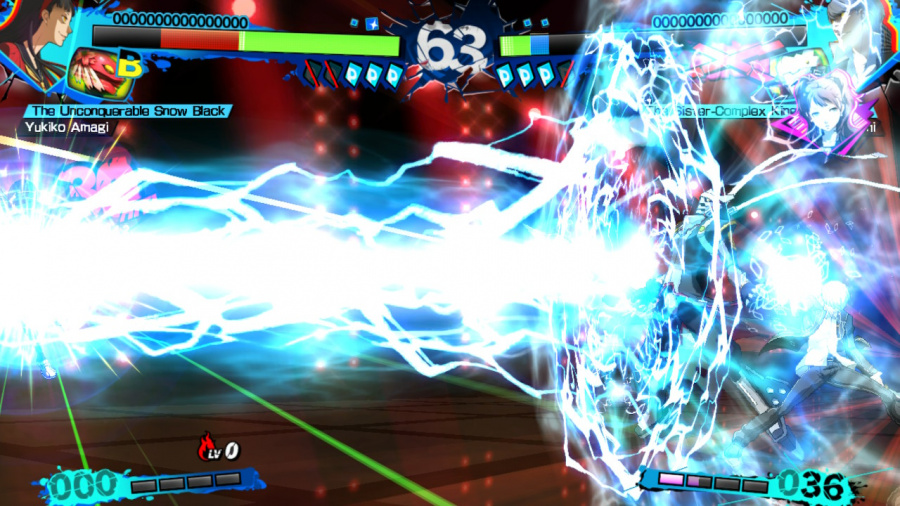 For this review period, we didn’t get to try out the online features, but we do think the Switch version specifically needs to be discussed here. All other versions of this re-release will be receiving an update later this summer that will add rollback netcode, but the Switch version won’t be getting that feature for technical reasons. For those of you out of the loop, rollback netcode is basically a term for a smoother and more lag-free online experience and is by far the preferred method of online implementation among fighting game fans. Every millisecond counts in a game as highly reliant on perfect timing around your button presses as this, and the fact that the Switch version won’t be receiving this critical feature means that players who want to focus on climbing the ranks online will be best served picking up P4AU on other platforms, if possible. Locally, we didn’t notice any performance drops at all, but this doesn’t mean much for those who plan on spending the bulk of their time battling players miles away from them. And though this lack of rollback doesn’t necessarily mean the Switch version’s online will be like playing chess through the mail, there’s no escaping the fact that the online performance simply won’t be on par with other platforms once the update is available.

As for its presentation, P4AU doesn’t disappoint in the slightest. Arc System Works has done an excellent job of translating Shigenori Soejima’s iconic character designs into impressively animated and fluid fighter sprites that retain all the personality and style of their RPG counterparts. We especially appreciated how flashy some of the combo finishers could get, positively lighting up the screen in a tremendous fireworks display of pain. Each level, meanwhile, has a lot going on in the background, with each one depicting some richly-detailed and twisted images of otherworldly locales. All this is backed by a high energy soundtrack that mixes in some fun remixes of favorite tracks from the mainline games with some jazzy, pop-rock new songs that fit in perfectly with the tone. Also, many of you will be pleased to know that there’s dual Japanese and English language audio in P4AU, and both casts deliver strong, satisfying performances, though the repetition of some lines can be a little irritating during longer sessions.

Persona 4 Arena Ultimax may not be the Persona game everyone’s been clamoring for on the Switch, but we’re certainly not complaining. P4AU offers up an approachable, yet incredibly deep 2D fighting combat system, a neat RPG-lite mode that guarantees solo players will have lots to do, and all this is presented in Arc System Works’ signature and striking hand-drawn art style. While the story mode is a complete bore and there’s no rollback netcode in this version, we think P4AU on Switch is still absolutely worth your time, although if you’re going to be playing online, you’ll likely want to investigate the game on other platforms first. For portable fans, however, we’d give it a recommendation whether you’re a fighting game enthusiast or you’re just looking to give the genre a shot; this is definitely one of the better fighting games on the Switch.