Mario Kart 8 Deluxe is the most popular game on Switch, the very definition of an ‘evergreen’ title. Aside from the Battle Mode and a few minor changes, however, devoted fans have been playing the same content since the Wii U original with its DLC content, a scenario that finally changes with the Mario Kart 8 Deluxe-exclusive Booster Course Pass.

Wave 1 has landed and generated plenty of excitement, and there’s certainly a thrill in booting the game up and being presented with two new Cups to enjoy — Golden Dash Cup and Lucky Cat Cup. The mix of courses reminds us that this is the equivalent of the ‘bottom row’ of the original line-up, with a range of retro and — for the first time — Mario Kart Tour tracks included in the eight new offerings. It’s a solid initial selection though, especially as this is the first batch and therefore presumably the ‘easier’ Cups in what will become a whopping 48-track package.

The standouts in this first wave, partly due to their unfamiliarity for anyone that hasn’t spent much time with the mobile entry in the series, are those Mario Kart Tour tracks. The Paris and Tokyo-themed courses look terrific and have smart alternate routes on the final lap, a neat touch to shake things up. 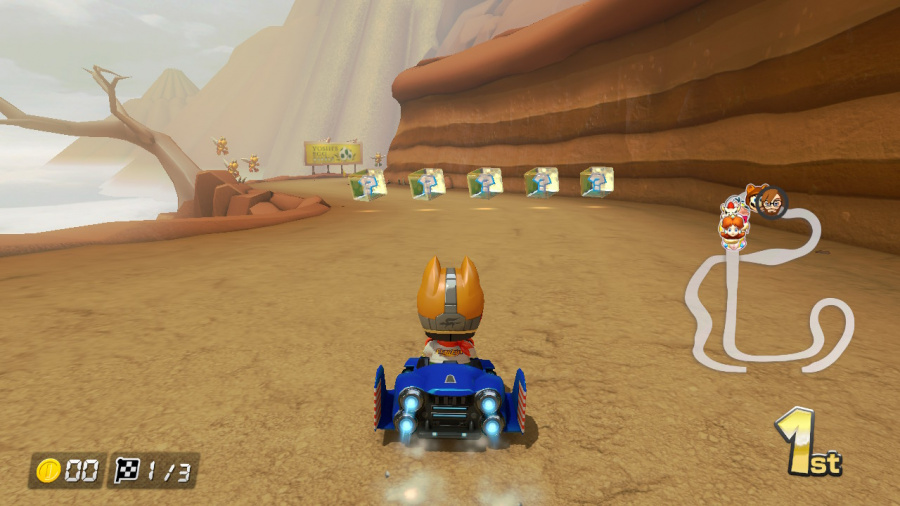 Ninja Hideaway is the most fiendish track in Wave 1, with multiple routes that’ll have strategists experimenting to find an edge. It’s a course that seems almost too tricky and clever for playing with mobile controls, and is an early favourite for us. Though relatively short (especially in the faster 200cc mode), these Mario Kart Tour courses hold up very well indeed on Switch’s widescreen canvas.

The retro tracks all have appeal, too, with Coconut Mall and Shroom Bridge being the strongest. The latter is a frenetic and rather hilarious experience in 200cc, with all racers struggling to avoid heavy traffic. The others are rather simple and ‘passable’ tracks, though as they’re based on work done for Mario Kart Tour we get a rather basic Sky Garden, which is a slight disappointment.

It’s also worth noting that these recreations don’t go the extra mile in adding any anti-grav sections — the main gimmick that Mario Kart 8 introduced to the series. In truth, those additions in the original MK8 retro tracks were sometimes rather simplistic and you do get boosts and gliding here — just don’t expect any major diversions from the source material.

It’s actually still a bit mad that we’re sitting here in 2022 playing new courses for Mario Kart 8 Deluxe, right? Booting up the game to be introduced to not one, but 12 new cups to enjoy over the coming months is kind of baffling, but I’ll take it!

These first two are a solid introduction, with nice variety on offer. As someone who’s never played Mario Kart Tour, I absolutely adored the visuals and music in Paris Promenade; it’s the perfect setup for what’s to come, albeit perhaps a bit bland in its layout when compared to the native Mario Kart 8 courses. Tokyo Blur, on the other hand, was my least favourite of the bunch — I wonder if it would have benefited from being set at night. As it is, the environment is largely forgettable and the course itself was a bit too “safe” for my liking.

The biggest surprise of the new DLC for me was Ninja Hideaway, the last track. It’s easily the trickiest to navigate, with some mighty impressive verticality on offer. I loved the aesthetic here and it truly felt like a course specifically built for Mario Kart 8. As for the legacy tracks, they’re all perfectly fine, though there was a niggling feeling that they simply aren’t built for the speed and handling of Mario Kart 8; it’s great to revisit old favourites, but their overall design and layout certainly feels basic compared to more recent courses.

All told, it’s got me excited for whatever else Nintendo offers up in the coming months; as much as I lament the more simplistic designs of the older tracks, it’s still Mario Kart, and that’s always a good thing!

That’s the key thing to remember with these tracks: ultimately, they’re recreations of fun courses but not the creative overhauls some might expect. On the one hand there’s a tinge of disappointment there, and a reflection that this is a bit of a ‘B Team’ effort from Nintendo, but the source courses are still entertaining and fit well into Mario Kart 8’s speed classes and mechanics.

In terms of presentation, the audio is a delight, with music remixes that improve the originals, full of the energy you’d expect in this title. Visually we have just decent results; the tracks look sharp in portable or docked play, and the development team has improved lighting and some aspects of design over what mobile players will have seen.

However, the MK Tour origins across this content is also evident, and in some cases it feels a little lacklustre on Nintendo’s part. Environmental factors like grass and sand are simplistic flat colours, lacking texture and life. Compare aspects like these with equivalents from the likes of Moo Moo Meadows or Dry Dry Desert — both retro remixes in the core game — and it’s not a favourable comparison.

Overall, Wave 1 of the Mario Kart 8 Deluxe Booster Course Pass is enjoyable and gives a modern classic a thrilling new spark of life. After blasting through the race classes, it’s likely the itch will be back and we’ll be back in the online lobbies once again, eagerly awaiting the five further waves to come between now and the end of 2023. That’s the key takeaway we took early on while sampling the Booster Course Pass — you can’t go far wrong with ‘more Mario Kart’.