We’d be lying like filthy, filthy little devils if we claimed that there was any shortage of Castlevania-alikes on the Switch. The likes of Odallus, Aggelos and most prominently the Bloodstained: Curse of the Moon duology are all right there on the eShop to cater for starved fans of Konami’s apparently-defunct series – not to mention the Castlevania Anniversary Collection and Castlevania Advance Collection for those thirsting to revisit. It was with some familiarity, then, that we dove headlong into Infernax for review. It all looked very much familiar, you see — medieval style world, NES throwback visuals and a Metroidvania map. But we were, gratefully, mistaken. See, this isn’t really a Castlevania-like at all, it’s closer to Tecmo’s Ninja Gaiden in both difficulty and game feel. And that’s certainly no bad thing.

Coming from Berzerk Studio (developer of the sublime Just Shapes & Beats), Infernax is an interesting halfway house between accessibility and raw challenge. Putting it that way makes it sound like the game is uneven in its difficulty, but that isn’t the case. It’s more that you have options. If you’re struggling to make progress, you’re never too far from a save point and you can always go elsewhere and fight monsters for XP and/or money, which is then spent on health potions, extra lives, upgrades to your weapon and armour, spells and even more besides. You can also take up sidequests that reward you with more gold and experience, the latter of which is used to upgrade your core strength, health and mana. You’re always just within spitting distance of your next improvement, too, which kept us playing when frustration could have set in from its challenges. 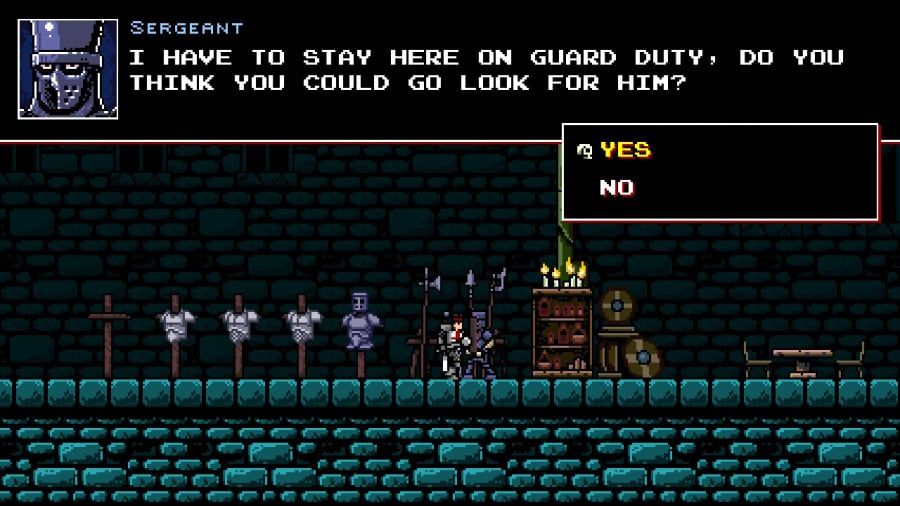 And what challenges! Infernax is a meaty, combat-heavy experience and the game does not go easy, even with extensive upgrades. Enemies take off huge chunks of your health at times, and they’ll duck and weave your own attacks with frankly frustrating ease at times. There’s no progress that isn’t earned and no single screen that’ll give you an easy ride. Outside of the main world map you’ll duck into castles and explore their dungeons looking for small keys that will ultimately lead you to new power-ups and the castle’s master, a gruesome series of boss battles required to reach the end. These dungeons recall the Shantae series in their design at times, and while difficult and demanding, they never feel unfair. You can set the difficulty to a less punishing mode, but we didn’t find this made things a whole lot easier — if anything, we’d recommend keeping it on “Classic” difficulty to train yourself.

Gruesome, indeed, is a watchword of the whole Infernax experience. This game is nasty, with exceptionally gory pixel art that depicts some of the more horrific monsters we’ve seen in a 2D game, all blood and guts and oozing orifices (orifi?). They’re no slouch in the whole “killing you” department, either — losing your last HP to any given enemy won’t see them stop at the final blow, they’ll keep attacking as the screen fades to black. You’d need to be identified by your dental records, although we wouldn’t put it past these creatures to grind said teeth into a fine paste just for the yuks. The general sense of Blasphemous-esque grimness seeps into the missions as well, with some offering some pretty harsh choices that have lasting consequences later as your decisions come home to roost. It’s surprisingly heavy at times but maintains a Grand Guignol take on the grotesque, so it’s much funnier than it is upsetting. 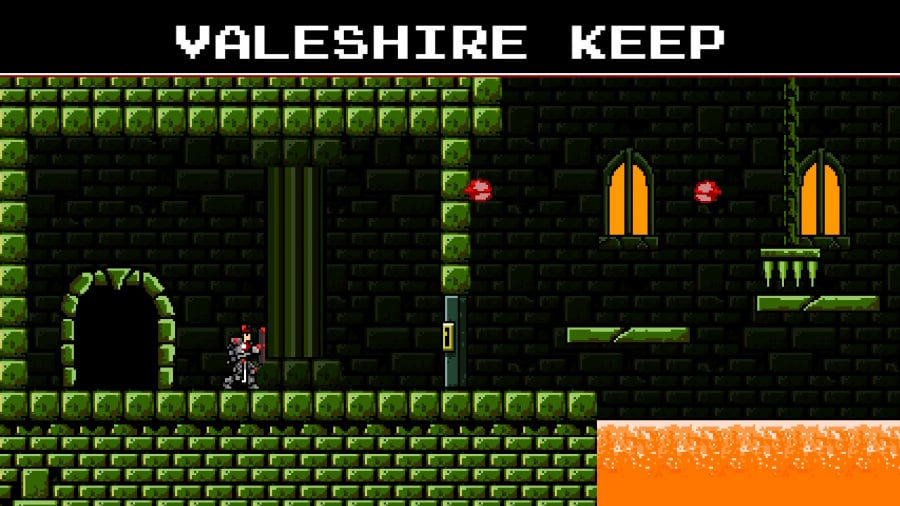 The visuals are solid 8-bit style sprites with strong clarity on what is and isn’t a platform, but the standard monsters are a little generic and small-seeming. They’re still fun to fight, which is what matters, but it would have been cool to see more variety. It all sounds the part, too, with great effects and a thumping old-school score. Cutscenes are brilliantly drawn and stylishly animated, and the atmosphere throughout is generally wonderfully horrific, as per the slightly smug disclaimer that appears at the start of the game.

A cute little touch we’ve neglected to mention is the gore that splatters over your character as you lay waste to your enemies. It’s not much, but it goes hand in hand with the care that’s been taken with the level design and game balancing.

While Infernax is tough, it’s resolutely fair — you can’t really make the game ‘easy’, but you can absolutely mitigate the difficulty or take a break doing something else when you get stuck. Don’t expect a simple ride, though, and don’t expect to take the right decisions on a first playthrough – not that anything seems particularly ‘right’ in this beautifully bloody little world. It’s only familiarity that lets Infernax down — there’s nothing really new here, but it’s all done and delivered so well that you won’t really care unless you’re desperate for a completely fresh experience. In which case why play a faux-retro NES throwback to begin with? A cut above most efforts in the subgenre, Infernax both demands and requires attention.