Cases for the Nintendo Switch aren’t a new phenomenon. Given that the device is portable in nature, it stands to reason that plenty of cases are available – especially with the Switch being five years old now – and we’ve seen a wide variety of different options, too. Some cases merely prevent damage during transit, while others bolt onto the console itself to offer that extra layer of protection. There are also options that include internal batteries, shifting the focus from protection to stamina.

The Plenbo G-Case does all of these things, and a little more besides. It’s a modular offering that not only includes an internal (and swappable) 5000mAh battery pack but also includes its own kickstand, Joy-Con holder and customisable grips. Oh, and it has its own Bluetooth transmitter which allows you to pair two sets of wireless headphones, as well as its own dock for charging and TV play.

There’s a lot to unpack here, so let’s start with the basics. The G-Case fits both the standard Switch and OLED model and is comprised of three main components. The main body of the case has the kickstand, battery (which can be used to charge other devices via USB-C) and Bluetooth audio functionality, as well as two rails where the left and right parts of the Joy-Con holder attach. 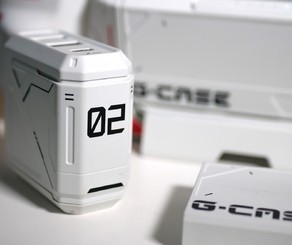 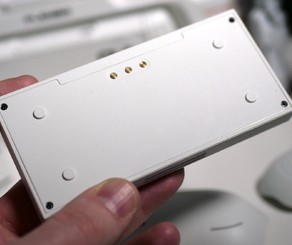 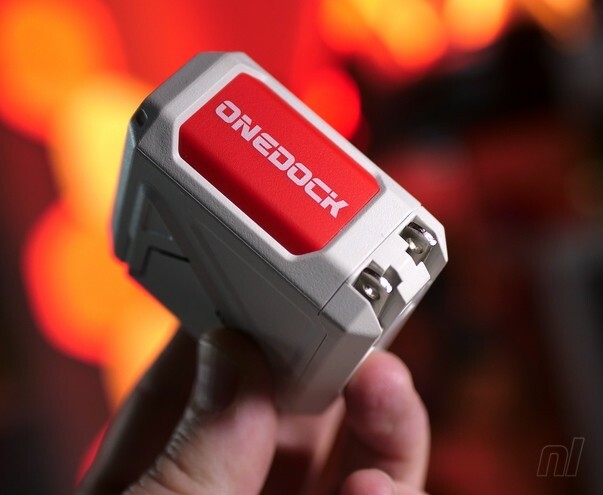 On the back of these, you’ll find removable grips (three styles are included). The idea is that when you’re playing in tabletop mode or connected to the TV, you can remove the two side parts and then combine them to create a handy Joy-Con grip. The two side parts even come with slots to store game cards – they really did think of everything!

The Switch itself slides into the top of the combined unit and interfaces with a USB-C plug. On the back of the case you’ll find the aforementioned rechargeable battery pack, which is held in place by fairly strong magnets. With the sample we were sent, there was an extra battery pack included, so you can always have one fully topped-up at all times. A handy set of LEDs on each battery tells you how much juice is left. Between the Switch’s internal power cell and these two packs, we had plenty of power when travelling.

The G-Case certainly offers plenty of options, and if you’re away from home for long periods of time, it will most definitely come in useful; the portable dock means you have the flexibility of playing on the TV without having to carry around the bulky official dock when you’re on the road. Everything fits inside a bundled hard-shell carry case which matches the overall ‘Big Japanese Robot’ aesthetic Planbo is seeking here. We also liked the fact that the swappable grips mean you can tinker with the case to get the desired ‘feel’ – and it goes without saying that, as huge fans of the legendary Mobile Suit Gundam series, we most certainly approve of anything that makes our Switch looks like one. 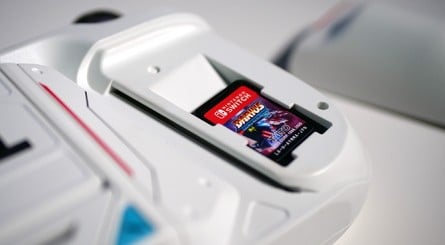 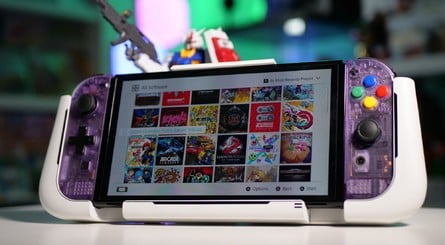 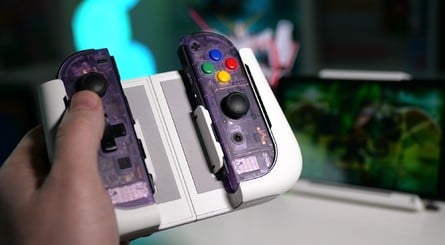 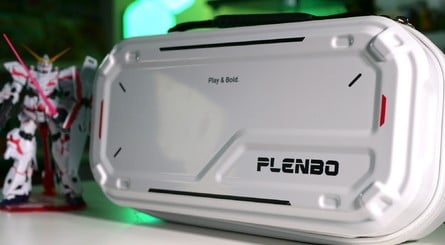 The biggest issue for us personally here is one that has been common since the days of the Game Boy, which itself was blessed with a wide range of bizarre accessories that transformed it from a relatively portable device to something that you’d need a rucksack to carry it in. When the G-Case is attached to the Switch, it becomes bulky and heavy – an understandable consequence of adding more functionality, but something that rather goes against the mobile nature of the console. We wouldn’t say it was uncomfortable to use for prolonged periods, but it certainly took some getting used to.

The £140 / $179 cost is another potential sticking point. If you merely want extra stamina then there are bolt-on battery cases that are much cheaper, or you can opt for an external battery pack – many of which offer more than 5000mAh and cost less. Of course, you then lose the option for docked play on the TV, but there’s no getting around the fact that the price is going to put this out of reach for most casual players.

There’s no doubting that the G-Case looks cool and offers a bunch of potential – especially for those who travel a lot and want to take full advantage of their Switch on the road – but it comes with its own drawbacks. Even so, if you’re after a case that makes your Switch look like it’s straight out of the Gundam universe, look no further.

Thanks to Plenbo for sending the sample featured here.