Multimedia projects can be tremendous accomplishments when pulled off right, drawing upon the unique strengths of different mediums to tell an all-encompassing tale. In the early 2000s, Bandai took a shot at one with Project .hack, which began with an anime and spun out to include a manga, a series of novels, and a four-part collection of video games for the PlayStation 2. This was then repeated with a follow up called .hack Conglomerate that moved forward a bit in the in-universe timeline to establish a new era of stories and characters. The main games to come out of this second wave were the .hack//G.U. trilogy, which saw a re-release on modern consoles in 2017 as .hack//G.U. Last Recode. Now that the remaster has made its way over to the Switch, we can confidently say that it was kind of worth the wait. .hack//G.U. Last Recode is the epitome of a filler game; it doesn’t do anything badly enough to really draw substantial ire, but it doesn’t do anything well enough to deserve much attention either.

The narrative of .hack//G.U. Last Recode is set some time after the original quadrilogy and acts as a largely standalone story following new characters that first-time players can comfortably follow. Here, we play as Haseo, a brash player in an MMO called The World R.2 who gets his kicks as a PKK—a Player-Killer-Killer who defends noobs from the nefarious Player Killers roaming the servers. In the first volume, Haseo is hunting for a mysterious PK called Tri-Edge, whose victims have been falling into a coma in the real world for some horrifying reason, and there’s a revenge motive to this hunt given that one of Haseo’s best friends was a recent victim. It doesn’t take long for Haseo to find and confront Tri-Edge, but he’s hopelessly outmatched in the ensuing battle and is ‘killed’, only to respawn having lost all the gear and levels that he spent hundreds of hours grinding for. Undeterred, Haseo thus sets out on a quest to regain his power and defeat Tri-Edge once and for all. 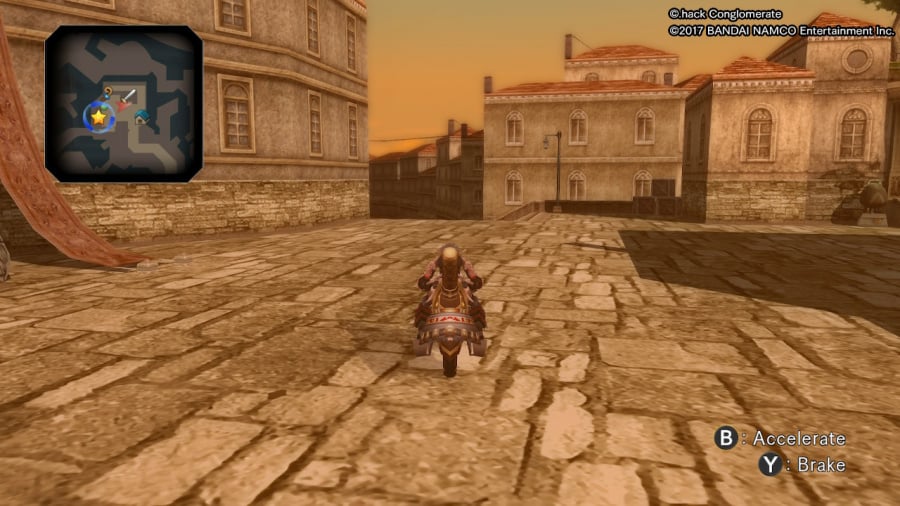 The premise of .hack//G.U. Last Recode is fascinating, although it must be said that the narrative hasn’t held up particularly well with time. Dialogue is often stilted and rather awkward, bordering on ridiculous in some areas. For example, Haseo is quite famous in the community for his work as a PKK, so the nickname he’s been given to mark this legacy is… The Terror of Death, and this is uttered by his foes as if it doesn’t sound like something a six-year-old would try naming their RuneScape character. Perhaps more importantly, there’s persistently an awkward disconnect between the premise of the game—which is that all the events you’re watching are unfolding in a fictional, in-game MMO—and the actions of the people who are playing it.

Simply put, almost everyone playing The World R.2 seems to treat the in-game events with the same level of seriousness as if they’re actual life or death scenarios. Sure, a coma-inducing big bad and other similar antagonists give some needed real-world stakes to the overarching plot, but many of the moment-to-moment plot beats that follow otherwise ‘normal’ things while playing The World R.2 will have the players screaming and behaving as though what happens to their avatar actually matters. Extreme suspension of disbelief, then, is effectively the only way to find any meaningful connection with this narrative, as you’re otherwise essentially watching close to 70 hours of eye-rolling drama about people who seriously need to go touch some grass. 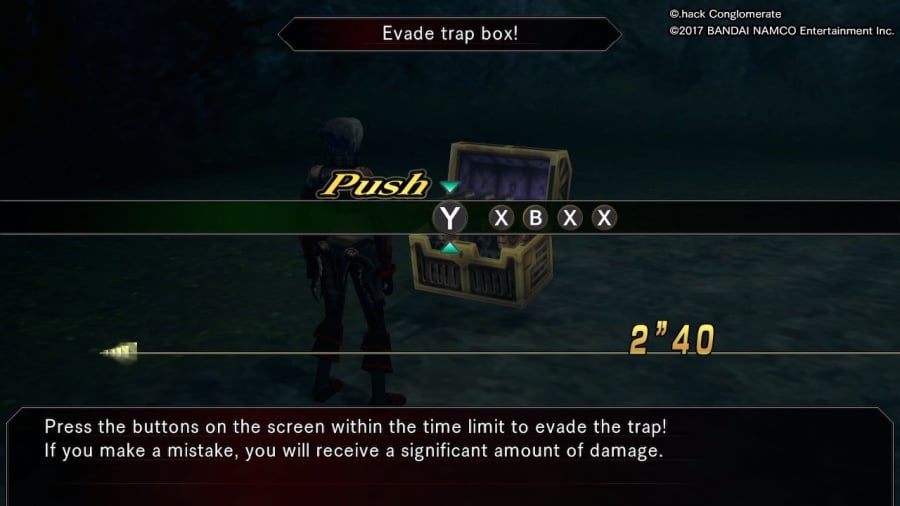 Gameplay unfolds in a manner befitting a grindy MMO, and this is another area where .hack//G.U. Last Recode is rather middling. The World R.2 is pitched as an unlimited and splendorous virtual world that provides an immersive experience for its players, but the actual design of the levels is substantially less interesting than you may think. Dungeons are mostly collections of bare, rectangular rooms that are connected by hallways which lead you to other bare, rectangular rooms. Things are spiced up slightly by the presence of ‘puzzles’ (push this button to open the door, collect the three things to progress, etc.) and the occasional treasure chest, but it doesn’t take long at all for the repetition to set in.

Combat is also repetitive, but proves to be a little more interesting due to its focus on action. Enemies roam right there on the map and you can get the upper hand by initiating battle before they see you. Once in combat, battles then follow basic hack ‘n’ slash rules where you mash the attack button to whittle them down while occasionally blocking or using a higher damage skill. If you keep up the assault on one foe for long enough, they’ll become vulnerable to a Rengeki, which is basically a flashy finisher that boosts the team’s morale bar. Once the bar fills up all the way, you can unleash an Awakening attack, which effectively ends the fight then and there.

This is a solid, if unspectacular combat system, but it’s let down greatly by the overall low difficulty throughout. All enemies and even many of the bosses can be eliminated using next to no tactics or skill, which makes the overall gameplay come off as feeling rather flat. What’s the point of having elemental attacks and flashy Rengeki attacks when most foes can be dropped in seconds by just waling away at them? You can always make things harder by intentionally choosing to spawn into areas that are way out of your level range, and this does help alleviate the issues with the mindless fighting, but it feels like a failure of the combat design if the player has to self-impose handicaps like this. More importantly, the controls in combat feel a little too clunky for their own good and never quite give you the sense of having full control over Haseo. 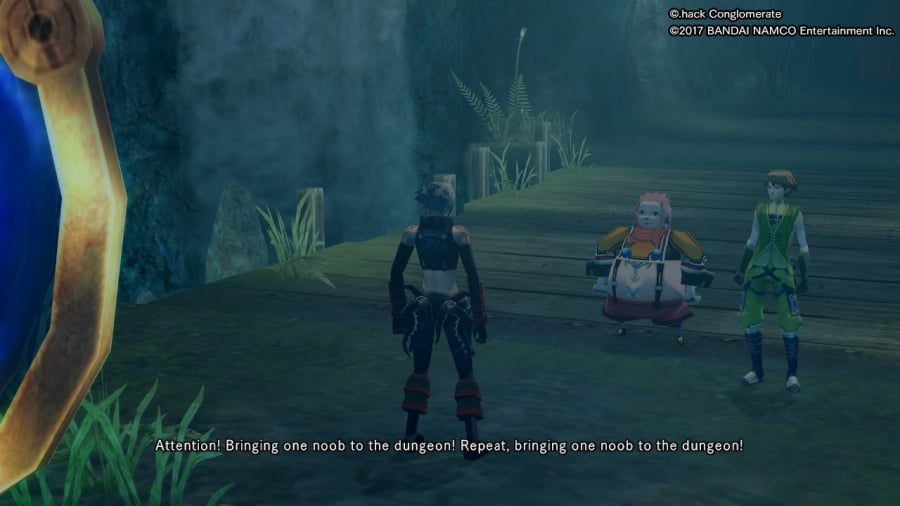 One bright spot of combat is found in an interesting mechanic—called Avatar Battle—that is limited to only some boss battles against rogue AI enemies. Here, Haseo calls forth a powerful mech-like summon named Skeith who then fights his foe in larger-scale battles. These fights mix some light shooting elements in the hack ‘n’ slash gameplay and feature some cool set pieces that prove to be some of the stand out moments of .hack//G.U. Last Recode., but again the issues with difficulty rear their head. Any semblance of tension is immediately vanquished by how easily Skeith can win these fights, and while that’s maybe the point, it doesn’t make for some terribly fun gameplay segments. Still, smashing things up as a giant data creature is a neat idea, and at the very least manages to inject some needed variety in the otherwise rinse and repeat combat.

Character progression otherwise follows expected RPG tropes, with you using the spoils and money earned from combat to get better loot back in town. Haseo belongs to the “Adept Rogue” class, which means that he can slowly unlock access to more weapons over the course of the narrative instead of being limited to just one type. There’s a nice sense of empowerment in slowly building up a repertoire of more weapons and respective skills to give you the tools to fight off all kinds of enemies, although it again feels undercut by the lack of an actual need to really test the limits of your arsenal. Still, there’s a nice loop here of leveling up and gaining new skills and weapons that feels good to engage in, helping to make the hours of grinding away a little more bearable. 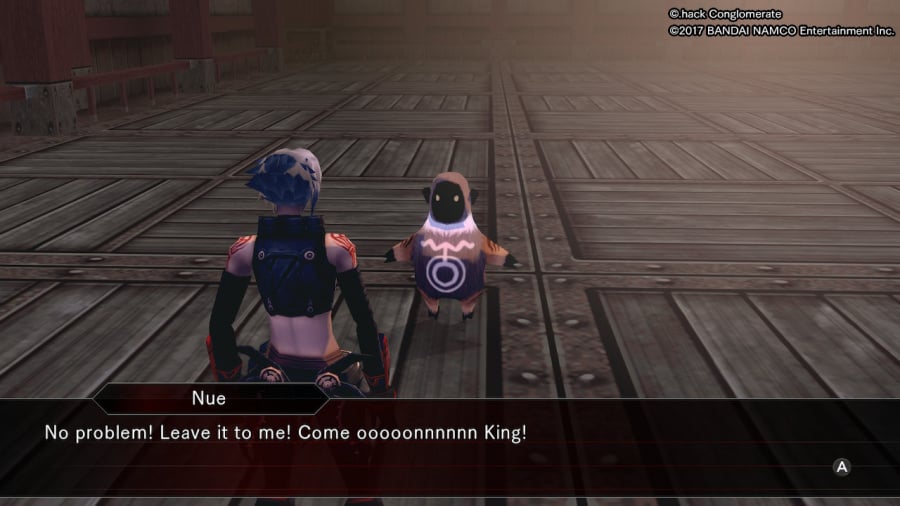 Now, an important thing to bear in mind regarding these gameplay and design issues is that the original three titles in .hack//G.U. Last Recode released in the mid-2000s on the PlayStation 2. To this end, they are are a little easier to accept with the context that they were more common to games of that era — although even when compared to contemporaries, .hack//G.U. was still behind the ball. Kingdom Hearts 2, for example, came out at about the same time as Rebirth and somehow managed to have more satisfying combat and interesting level design. Some of .hack//G.U. Last Recode issues can be chalked up to its age, but it unfortunately just seems like this was a series that never quite found its footing with its gameplay. There are the foundations of good ideas here, but none of them were expanded or built upon in any meaningful ways.

As part of this re-release, there’s been an additional fourth volume, called Vol.4//Reconnection, created to conclude the collection. Before you let off a big sigh at yet another full-length, copy-and-paste .hack game, bear in mind that this is less of a full scale release and more of a brief epilogue to tie off some loose ends around the original resolution of Vol.3//Redemption. In this way, it’s vaguely similar to the recent(ish) Future Connected storyline that was added to Xenoblade Chronicles: Definitive Edition; a fun revisit to an old world that shows you what the main players are up to. For those who do get invested in the narrative, this little extra proves to be a nice finale which clocks in at about five hours. 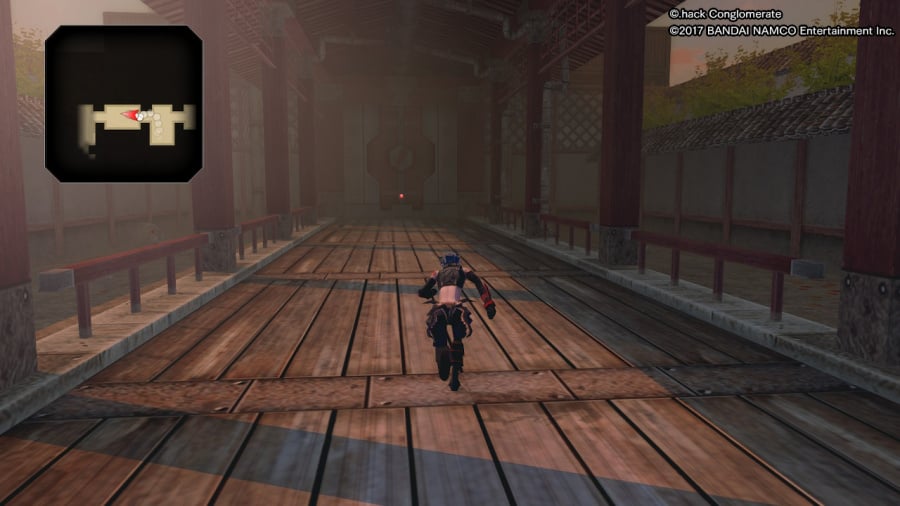 As for its presentation, .hack//G.U. Last Recode is still obviously built on the bones of a mid-2000s RPG, but the team has done an admirable job of upscaling The World R.2 to HD resolution. Character models are much sharper than their original iterations, obviously, and little updates like enhanced lighting showcase the usage of stronger hardware.

However, elements like low-res textures and extremely simplistic world design hold this one back from passing as a modern release. There are a smattering of localization errors to be found in the script, too, which—while charming in their way—feel like a weird oversight given that this was a second pass at the original games.

.hack//G.U. Last Recode isn’t a bad game, it’s just aggressively mediocre. These three games weren’t fantastic when they were new and, surprise surprise, they still aren’t great now. Repetitive dungeon design, extremely easy combat, and an often nonsensical narrative prove to be this release’s greatest weaknesses, holding it back from fulfilling the interesting concept of its premise. Still, if you want the nostalgia trip or for some reason aren’t satisfied with the near-bottomless list of more interesting RPGs on the Switch, it may be worth the punt. We’d give this one a light recommendation, then, but would say you’re better off picking up the remasters of Final Fantasy XII or Shin Megami Tensei III if you’re looking for a worthwhile sixth-generation RPG. If it’s specifically the concept of a single player MMO that interests you, then either CrossCode or one of the Xenoblade releases will scratch that itch far better.