This is the sad Haiku of Ganryu 2,
A tragedy coded in Unity,
By the Storybird crew.

Visco, a long defunct Neo Geo developer, is having its IPs plundered of late, like a bounty sadly washed ashore. Following on from Picorinne Soft’s Andro Dunos sequel, Ganryu – a distinctly average 1999 arcade game – has now been reanimated by Storybird Studio.

Like the original, this spiritual sequel is a feudal Japan-themed hack and slash platform game in the vein of Shinobi. Where Visco’s title fell short in every respect bar its graphical charm, Ganryu 2 attempts a more layered imagining of the concept.

Mechanically, this runs deep, dishing out a lovely set of manoeuvres for the player to toy with and enjoy. Throwing knives, double-tap runs, rapid-fire sword flurries, insta-kill dashes, and a host of magic attacks all compliment your basic, sword-carving combos. You can double jump and sword spin on your way down, ping between walls, and recover mid-air for flashy kills and spritely ledge negotiations. It’s a limber repertoire with a feel-good snap that pines for speed-running endeavour. 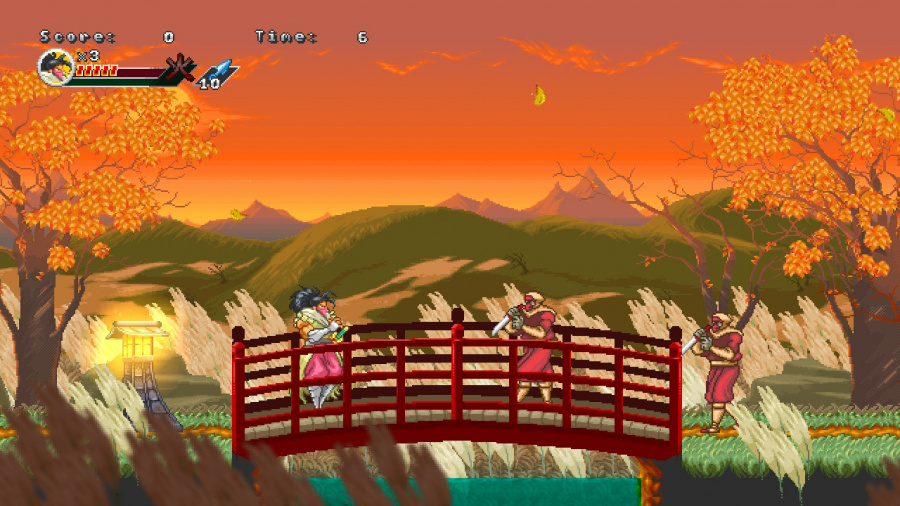 Graphically, too, it’s rather pretty, looking much better in motion than in screenshots, with strong background elements, weather effects, nice palettes, and a variety of colour-coded popcorn enemies that signal different threats. Larger, hulking opponents pepper the landscape too, reminiscent of certain Shinobi III adversaries, requiring you to stun them with your dash before cleaving them out of existence. Additionally, bosses both look the part and deliver fun, strategic pattern-based skirmishes.

In-fact, with all of these elements in place, Ganryu 2 should be a surprisingly good game. Sadly, it’s hobbled like Kathy Bates went at its ankles with a sledgehammer. Programmed in Unity, the same engine that buckled Platinum’s Sol Cresta, Ganryu 2 seems perfectly fine until the stage introduction, where you suddenly sniff what appears to be performance issues. Into the thing proper, and it’s clear stage one is chugging a tad, especially where it gets busier. It’s just not smooth at all, and by the time you hit a mine cart chase, it’s clear there’s a chronic problem at hand.

We considered that these issues might be restricted to playing in handheld, but it proved equally concerning when docked. Despite this, we still reaped some enjoyment clearing the first two acts, mostly owing to the well designed edifice beneath its technical deficiencies. Moments of successful dashes and strikes, knife flings and quick evades had us claw back a touch of optimism that Ganryu 2 might, at the very least, be worthy of attention. This was quickly dispelled by the shocking mess that is stage two, where the jitter is magnified a great deal, dropping at points to an eyeball-stabbing 15 FPS (in our guesstimate). ‘Unplayable’ isn’t a term to be banded about lightly, but the frame rate – or lack thereof – is so appalling here that it’s almost running backwards. 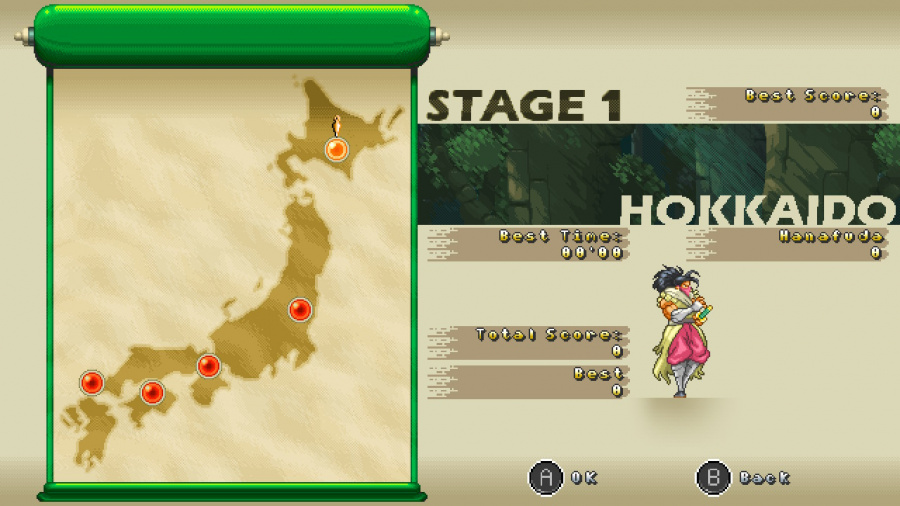 It’s so janky, in-fact, that things no longer work in the way they were intended. Sometimes, the action gets too stuttered to allow your inputs to respond, or your character to switch directions in time to strike incoming enemies. This vexation is compounded by the fact that the core mechanics are actually noteworthy, but summarily sunk by the engine’s performance and the studio’s unsuccessful efforts at optimisation. Stage layouts aren’t bad: there’s tons to slash at, hidden areas to crash through, lots of extra lives, point bonuses, and magic to accrue. But when it starts running like a monkey with no legs, it’s effectively ruined, negating any opportunity for clean skill application.

It’s designed to be fairly challenging, requiring attention and reflexes to build magic and negotiate pitfalls, but in later stages the difficulty can spike very unevenly, and the entire thing seems littered with bugs, memory leaks and glitches. Moreover, clunky programming and stage design elements can be a hindrance, too. You sometimes can’t clear bamboo traps with your dash because your hit-box gets snagged on the land’s edge; ascents carpeted with spike traps are also awkwardly implemented. Yet, these problems pale in comparison compared to how roughly the thing moves.

Curiosity took us to the game’s pre-release trailer, where these problems either aren’t present or difficult to discern, and then sat contemplating whether or not to give it an honourable death. While frame rate issues fluctuate a lot throughout the game, they’re still consistently overshadowing the experience: in some places they’re less prominent, in others they can grind things to a near halt.

Ganryu 2: Hakuma Kojiro gives us one of the most mystifying pieces of software to hit the public domain in recent times. If it could muster even a stable 30 FPS, it would likely be a commendable arcade action adventure, featuring nice mechanics, stage variety, large bosses and pleasing graphics. Possibly, even, a highlight in its genre. As it stands, it’s so confusing a technical train wreck that we can barely make sense of why it’s been released in this condition. Should a patch materialise that resolves these issues entirely you can add at least three points to our current score, but at present technical problems gravely undermine the positives.