Look, there’s nothing wrong with a little anatomical allure, generally speaking. Hell, many an impressionable teenager hit pause to glimpse Chun-Li’s undies back in the day, and Capcom knew it. Sex sells, and, like all commercial media, video game developers aren’t immune to slapping some greasy smut on-disc in the hope of cementing another sale. Boobs, butts, oily pecs and sculpted crotches: gaming has seen it all — and Switch owners have seen more than ever before on a Nintendo console.

The majority of Gal Gun’s cattle-like cast, however, are Japanese high-schoolers. Whether or not they’re Junior or Senior students is left ambiguous, making the premise of sexually gratifying its targets largely at odds with legal systems across most of the world, which explains its banning in countries like New Zealand and Germany. ‘But hey, they’re just, like, cartoons, man’ is certainly one common argument in their defence.

‘Hikikomori’ is a Japanese term for a bedroom-dweller suffering “acute social withdrawal”, characterised as hermits who forgo sunlight and human interaction for a room adorned with anime-girl posters, pillows and video games. Gal Gun: Double Peace is tailored to such a reclusive audience, and does little to cater to those who desire depth from a gaming experience. Instead, its detail lies in its harem of schoolgirls, all desperate to take a bite out of you, the socially awkward protagonist. 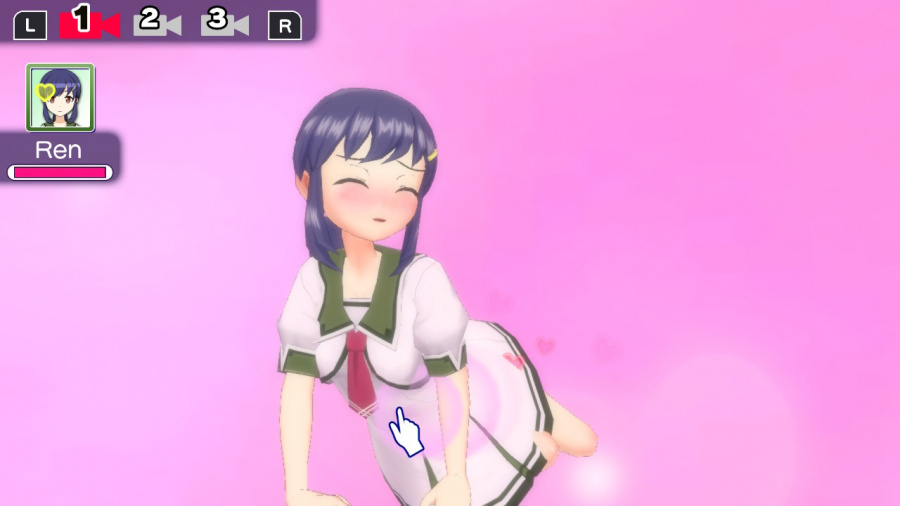 You can choose from several personality types (one labelled simply ‘Pervert’) before being thrown into a part-shooting gallery, part-visual novel, part-dating sim. The story goes that an angel with cupid powers has done you an enormous disservice by making members of the opposite sex ravenously attracted to you. You need to fend them off by firing pheromones at them, essentially bringing them to ‘euphoria’ — the game’s preferred synonym for orgasm — before they drain your life bar by showering you with kisses or pinning you underfoot, dominatrix-style.

Your pheromone gun has several functions, including a charge shot that brings targets to instant climax, and a zoom lens with X-Ray properties that reveals bras, panties, and the odd hidden item, such as garter belts and… sandwiches. These items can be used to check off cell phone message requests in a between-stage directory, padding out the game’s longevity by way of fastidious underwear inspection.

Additionally, inducing pleasure on the mindless, giggling hoard builds a ‘Doki-Doki’ meter, which offers three stocks of usage. Triggering this allows you to freeze and select multiple on-screen girls for a molestation sub-game, where, within a set time limit, you get to touch-up their preferred erogenous zones until they blush and blow hearts all over the place. Additional rotating camera angles for these intimate moments can be purchased from the shop, so you can get a better look at a polygonal crotch should you be taken with doing so. Successful Doki-Doki clinches serve to wipe out all other on-screen assailants, too, acting as a ‘love bomb’ of sorts. 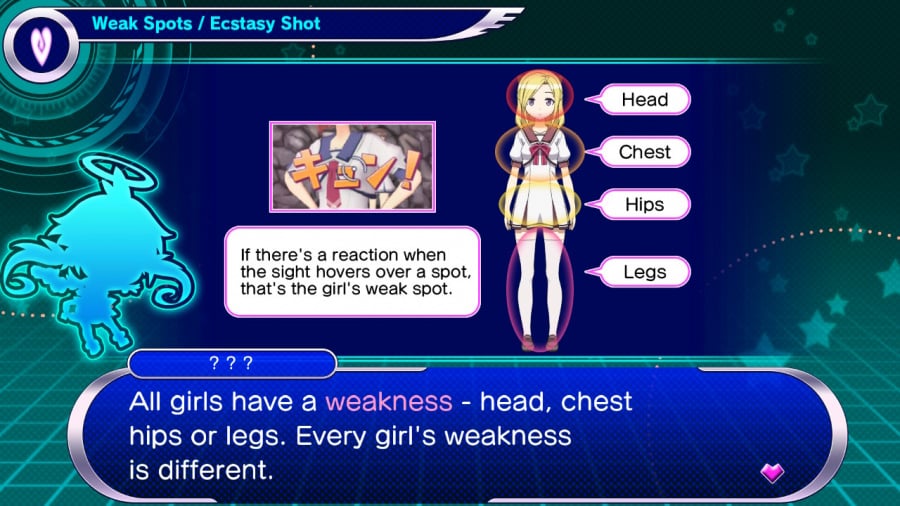 Graphically it’s bright and clean, and not a bad-looking game. It runs smoothly — a far cry from the sluggish PS Vita original — and the general presentation is superb, with plenty of nice illustrations and menus. The character models are the stars of the show, varied (in the sense they have different hairstyles and eye colours) and meld well with the game’s pastel tones. It’s been slightly smoothed over with a bit of PlayStation 2-style smudge, which tries to hide the fact that it’s not hugely updated from its PS Vita days, and there’s still a fair bit of loading to get through with all the cutscene interruptions.

The shooting stuff works perfectly well, with the broad aiming reticle doing a fine job, and plenty of options to adjust its speed if required — but Time Crisis it ain’t. The stages are short, which helps if you’re seeking to improve score, stage rank and your character’s attributes, but it’s all very static. There are no graphical flourishes going on from courtyard to classroom; no moving cars, roaming birds or fluttering handbills. It attempts variety by occasionally having you shift the camera in three directions, or pinpoint mini-demons fluttering around before the girls can be orgasmed out of existence. The skill lies in learning, by visual recognition and name tags, all of the students and their specific erogenous zones. Hardened players, for example, will know that the blonde with pigtails and glasses likes the pheromones up top, and can build strings of ‘Ecstasy Shot’ combos to truly master the game. 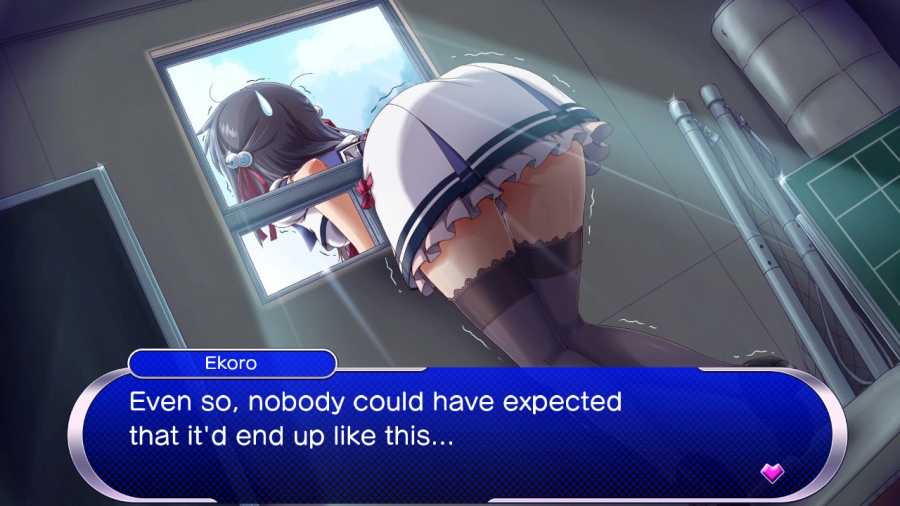 That said, Gal Gun is so leisurely on Beginner it teeters on boring. Expert Mode demands tighter wrist action and serves a modest challenge, but the game’s three hour runtime is mostly bolstered by its variety of routes, augmented by who you choose to “love” (non-reciprocally, of course) at the end of stage 1-2. Some options here are unlocked through extended play, and a few choice-based junctures occur during the adventure that affect the narrative. You’re also regularly offered options of whether to head off to the locker room, gym, library, etc., allowing you to tailor your scenery and uniform fetishes alike. The game is bursting with tacked-on secrets, endings, and collectible bonuses, from character profiles and journals to a shop full of lewd trinkets.

Boss battles are fairly sparse, and range from typical projectile shooting and timed target dispatching, to sections where you get to do a bit of finger rubbing and stick waggling to address an on-screen bind. These range from teasing a girl who’s ass is stuck in an open window, freeing her through a process of heaving your analogs up and down, to destroying the tentacle-like tongues of monsters before they lick your fair maiden to death.

The original PS Vita and PS4 releases had several infamous DLC packs in Japan, costing almost as much as the actual game. One, known as ‘Pheromone Z’, would remove clothing during camera zooms, while the other allowed adjustment of the cast’s breast sizes. Although we didn’t reach a point where these particular features were unlocked, this Switch version touts all previous DLC, including the dressing room, where you can switch your love interest’s garb. It also features an exclusive opening cinematic, which unimpressively flings the game’s art assets around the screen to an insufferably annoying song. 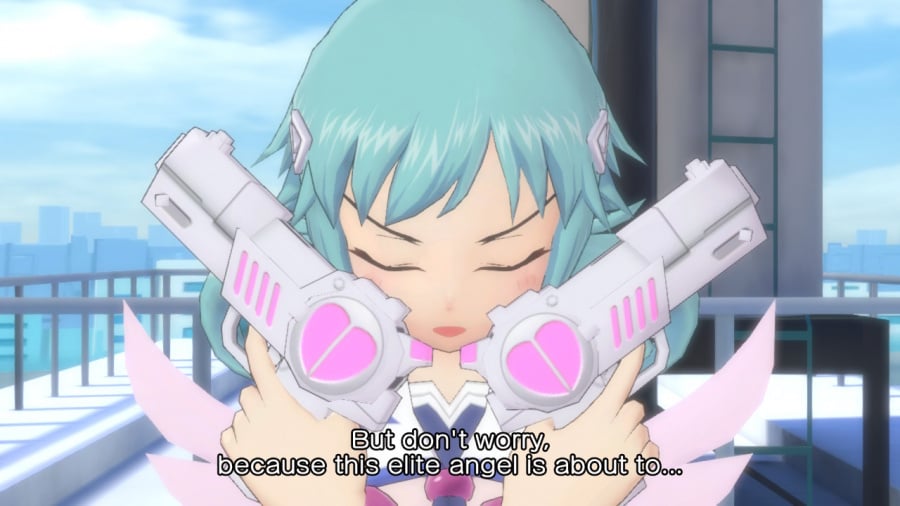 The talkie bits in-between stages are trite, helium-induced bouts of cartoon waffle, updating you on your romantic pursuit as cutesy angels and demons attempt — and fail — to inject humour into proceedings. If that sounds like something you would normally skip, this isn’t a game for you.

If you consider yourself an anime-infatuated Hikikomori, adjust the scoreline below to a 10. You’ll love it. Everyone else should genuinely consider whether spending their hard-earned money on this is the best way to get their rocks off. It’s also worth noting that Gal Gun diminishes the portability of the Switch by about 90%, because you almost certainly wouldn’t be seen dead playing it in public.

Gal Gun: Double Peace knows its audience, almost too well. Its entertainment factor is centred around crass perversion dressed up like a Saturday morning kid’s cartoon; and, if anyone attempts to tell you it’s a play on satire addressing the difficulties Japanese women face in a largely sexist society, feel free to laugh loudly in their face. That said, this is admittedly more of a game — and an altogether better game — than most that fall into the ecchi category. While simplistic, there’s nothing particularly broken about it, and its Expert Mode does offer a playable enough game to be mildly involving. But, if you don’t have a particular affection for its window-dressing, there’s not a great deal here to keep rail-shooting fans engaged.