Formula Retro Racing is based on a particular era of arcade racers: namely, the very early polygonal era in which games like Virtua Racing (well, okay, it was really only Virtua Racing) were wowing arcade-goers.

As in Sega’s seminal arcade racer, Formula Retro Racing uses large, chunky polygons for its cars and tracks and has very little shading, giving everything an extremely clean and minimalist look. Back in the day this was necessary for performance, but in the modern era it’s strictly a conscious design choice and we’re all for it. Much like the Sega Ages re-release of Virtua Racing on the Switch, this polygonal art style looks exceptional in HD, and looks particularly striking on a Switch OLED where its bold colours pop.

Unfortunately, however, the Switch version of the game also brings with it some fairly severe performance issues, which can quite frequently prove to be distracting. Whereas other versions of the game — which released on Xbox and PC in 2020 and PlayStation the following year — are able to hit a steady 60 frames per second with relative ease, the Switch version also aims for 60 but regularly falls well short. 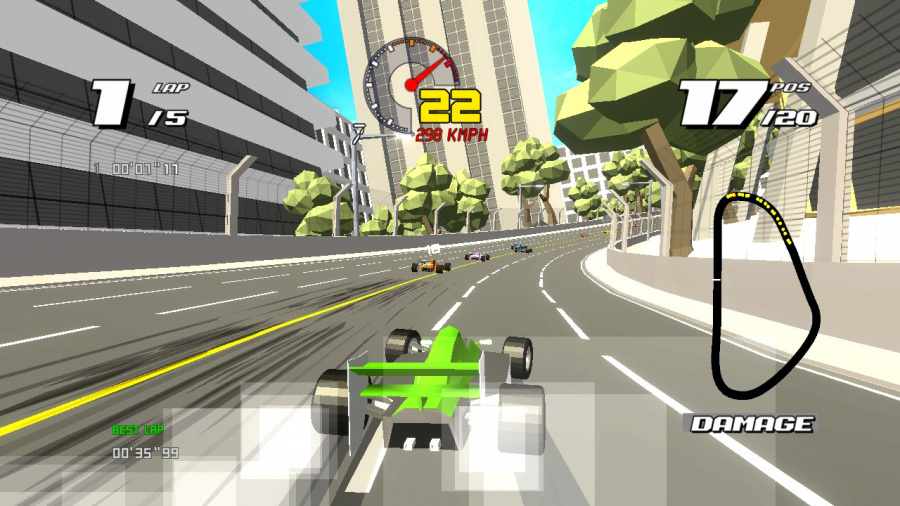 Essentially, any time you’re racing on more than just a plain, featureless part of the track, the game will start to chug a little and clearly struggles to keep up with things. Given that one track, Monte Carlo, is based on the F1 Monaco circuit and is therefore full of buildings and other scenery, this is one of the worst performing tracks and really hampers the enjoyment of what should be a highlight.

If you can put up with these performance issues, what you have here is your typical arcade-style racer with reasonably solid handling. It can be quite satisfying taking corners at high speed because, in true Virtua Racing style, your car makes wild screeching noises any time you take even a moderate turn, meaning you always feel like you’re pushing it to the limit even when you aren’t. It’s not very realistic, but it’s fun.

What’s less fun, however, is the way the AI racers behave. It’s almost as if they don’t even realise you’re on the track, and they regularly plough through you or get in your way, causing both of you to explode in a mess of polygons and forcing a respawn. This wouldn’t be too annoying were it not for the fact that playing on Advanced difficulty generally requires a perfect run to finish in the first place. On top of that, the game’s drafting mechanic (where you pick up speed by catching an opponent’s slipstream) doesn’t kick in until you’re practically right behind someone, meaning smacking into the back of them is a regular occurrence. 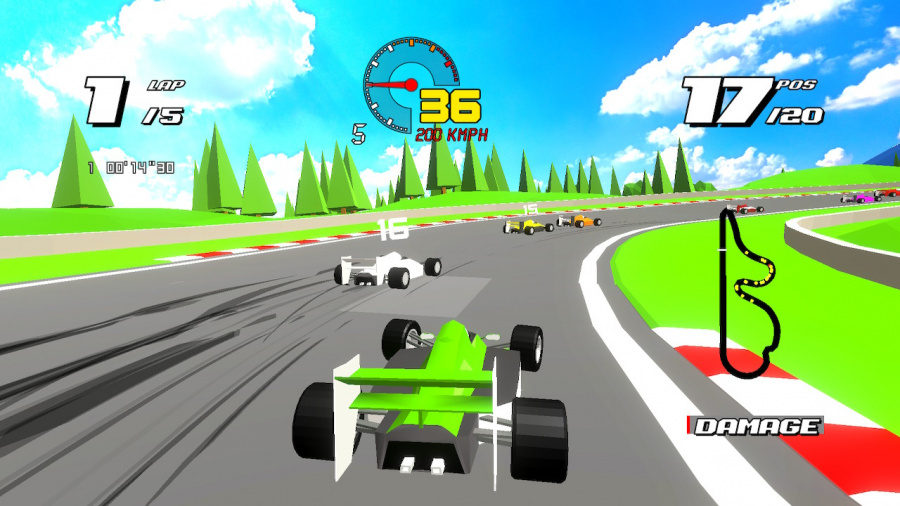 True to its arcade roots, the game doesn’t have any sort of major progression system. The main Arcade mode lets you simply take on any of its eight tracks in either Beginner, Advanced or Expert difficulty levels, and the aim is simply to finish in first place on each race and collect a trophy. Once you’ve collected all three trophies on every track, you’ve basically reached the limit of what you can do in Arcade mode.

There’s also another mode called Eliminator, which puts an interesting spin on things by essentially acting like a survival mode. The aim here is to complete as many laps as possible without dropping down below 10th place. That may seem easy enough, but the twist is that each of the AI cars gets a little bit faster every time you complete a lap, meaning they’ll eventually have a higher top speed than you.

Again, this mode has three difficulty levels and takes place over all eight tracks, meaning there’s at least another nice chunk of gameplay to be had once all the Arcade cups have been earned. But once that’s all done, there’s really not much else to do except try to better your lap times. There are no major unlockables, all the cars look identical and perform the same as far as we can tell, and there’s no online multiplayer. There’s a split-screen multiplayer mode for 2-4 players, but as you would expect this too suffers from performance issues and can be even more sluggish at times, which is a real shame. 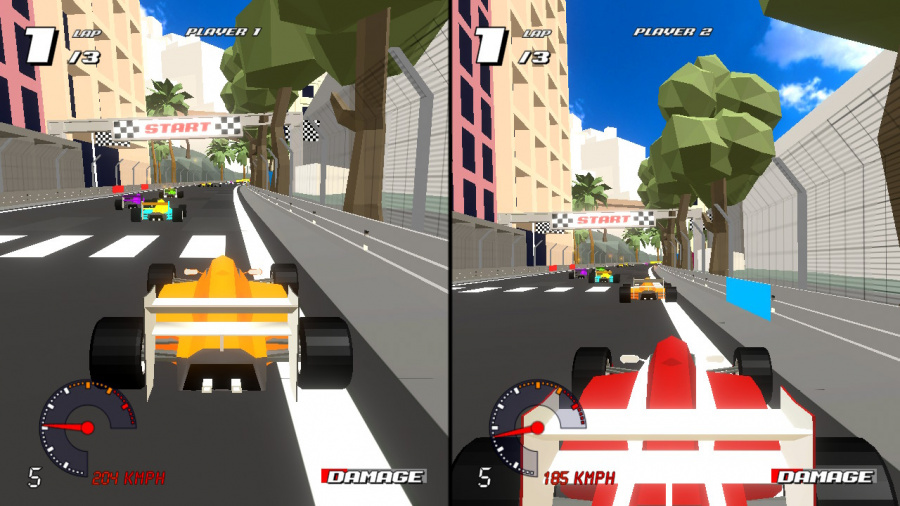 Ultimately, it’s these performance issues that are the most disappointing aspect of the game. We’re not always sticklers for frame rate – some people take it a bit too far at times, if you ask us – but there are some situations where you do have to step back and wonder why a game performs the way it does. It’s clear from the way it looks that the Switch should, on paper, be able to handle something like Formula Retro Racing at 60 frames per second without too much of a struggle. Far more detailed games have pulled it off, after all, which leads us to believe there may be an optimisation issue here.

The real problem the game faces, of course, is that its direct inspiration is also available on the Switch. It’s all well and good being a Virtua Racing alternative on Xbox and PlayStation consoles, but when the actual Virtua Racing (in its Sega Ages guise) is already available, costs half the price and runs at a rock solid 60 frames per second, then Formula Retro Racing suddenly becomes a much harder sell.

Formula Retro Racing is far from a bad racing game. It’s perfectly fine, it handles well enough and it does a good job of replicating the art style of the early ’90s arcade era. But its performance issues on Switch and the frustrating AI behaviour means that it should only really be considered if you’ve absolutely rinsed everything to do in Sega Ages Virtua Racing and are looking for something else to scratch a similar itch.