Koei Tecmo’s Dynasty Warriors series has followed much the same rhythm of releases since way back in the early noughties, with each mainline entry in the franchise since 2003’s Dynasty Warriors 4 followed by both an Xtreme and Empires spin-off, the latter of which adds a little bit of strategic tinkering to the usual Musou mix. It’s nothing particularly complex, for sure, but as fans of this genre we always look forward to the arrival of a new Empires variant as it gives these hack-and-slash action-fests a little more in the way of depth and replayability.

Dynasty Warriors 9: Empires is the very first Empires game to hit Switch, and only the second Dynasty Warriors proper to arrive on Nintendo’s console, following on from 2018’s thoroughly decent Dynasty Warriors 8: Xtreme Legends. We’ve been excited to get our hands on this one, then, eager to jump into some all-conquering action, cutting swathes through screenfuls of enemies whilst expanding our empire across the length and breadth of China.

However, what’s been served up here — and there’s really no beating about the bush to be done we’re afraid — is a bit of a dog’s dinner, a poor entry in the franchise regardless of what platform you’re playing on that’s seriously lacking in content and modes, and which arrives on Switch with a shoddy port that looks bad and performs disappointingly. 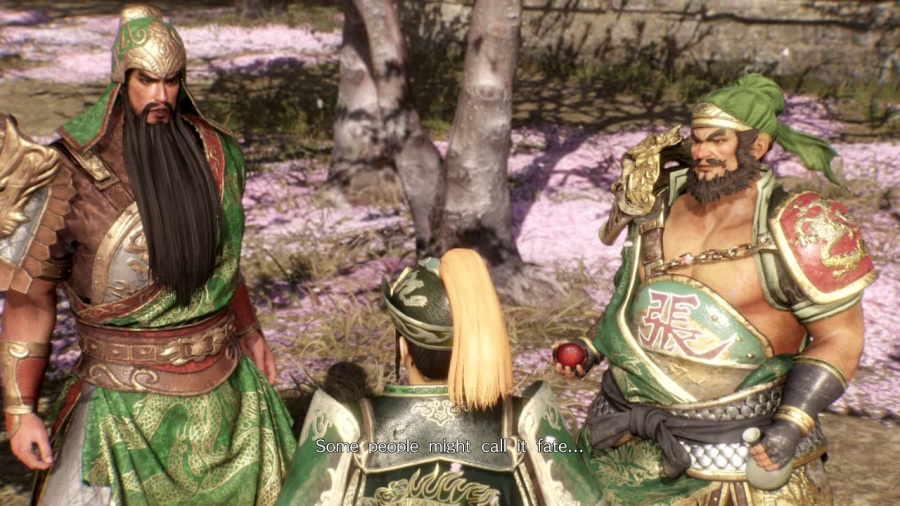 There are already quite a few excellent Musou titles floating around on the Switch eShop these days, with the likes of Hyrule Warriors: Age of Calamity, Fire Emblem Warriors and good old One Piece Pirate Warriors 4 providing plenty of satisfying hack-and-slash action for players to dig into. However, one problem that all of these games share on Nintendo’s hybrid console is a tendency to struggle with frame rate issues during the genre’s signature mass brawls. Get a big scrap going, start firing off some fancy special moves and you’re in for a bit of a stutterfest. It’s not ideal but it is, to some extent, understandable given the hardware that developers are attempting to squeeze these ludicrously large battles onto.

In an attempt to avoid these issues, the developer has really gone to town with downgrading all graphical aspects of Dynasty Warriors 9: Empires on Switch, resulting in a game that looks hugely underwhelming in action. It sucks a lot of the fun out of playing when it looks this rough but, we guess, it could be a trade-off worth making if the game held a solid 30fps. However that’s not the case here, with a frame rate that consistently hovers around the 20fps mark and often dips lower during intense action sequences. It doesn’t feel great to play and, when combined with visuals that have been rendered utterly bland, devoid of any texture detail and plagued by a ton of very noticeable pop-in, you’re left with a premium-priced product that looks and feels like real bargain bin material. 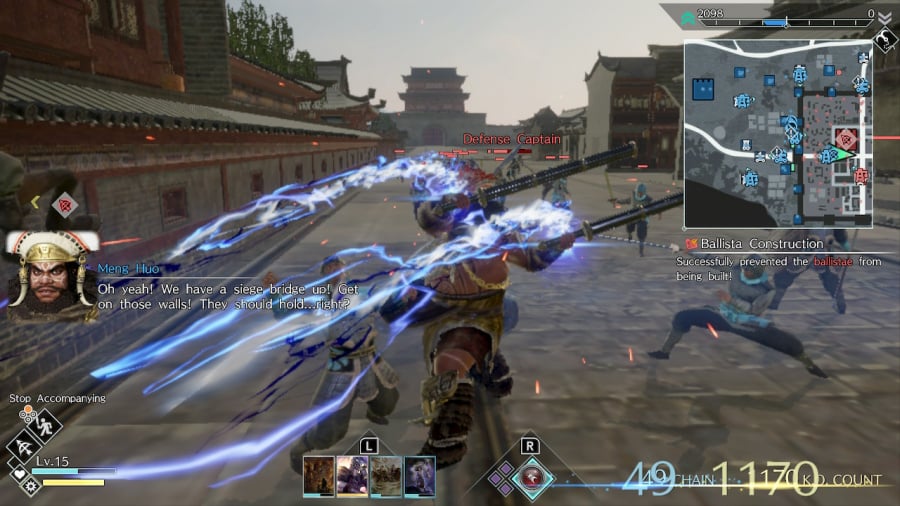 And all of this is before we even start on the actual gameplay itself. Fans of the franchise will know what to expect, with your time divided between the usual running battles against hundreds of foes and extended periods of menu navigation where you’ll choose how to spend your months before the next war council; training up your armies, raising funds, doing a spot of farming, ensuring you’ve got enough rations to go around and so on. None of this is particularly in-depth at the best of times, but it suffers hugely in this latest Empires entry because the action that it’s attached to is so absolutely naff.

No amount of unlocking trinkets to buff your weapons, or being rewarded with new secret plans to enact on the battlefield, or positioning your forces around the world map, or careful consideration of your relations with other rulers can paper over the fact that most of the strategy here counts for very little when you’re marching into action against such utterly dumb enemy AI — and with an army of similarly braindead allies in tow.

Getting stuck into the action here reveals a game that expects you, as a solo soldier, to do all of the heavy-lifting. No matter what plans you’ve made in the build up to battle, it turns out your armies haven’t a clue how to organise themselves during a ruckus. Stick the game on Normal difficulty and you blaze through equally matched enemy armies with ease; up the difficulty and you’ll get one-shotted by opposing generals in the most unfair and unavoidable ways possible. There’s no nuance or intelligence at work here, Dynasty Warriors 9: Empires is just shockingly poor for the most part; janky, repetitive and stripped of almost all of the fun that regular entries in this franchise provide on account of the fact that you’re boxed into these tiny, ugly little arenas and forced to run ad nauseum between the same handful of map icons in order to thwart enemy attacks. Move from one map icon to the next, whittling down opposing forces until your army eventually gets a battering ram onto the field and clears a path to an underwhelming decisive battle. 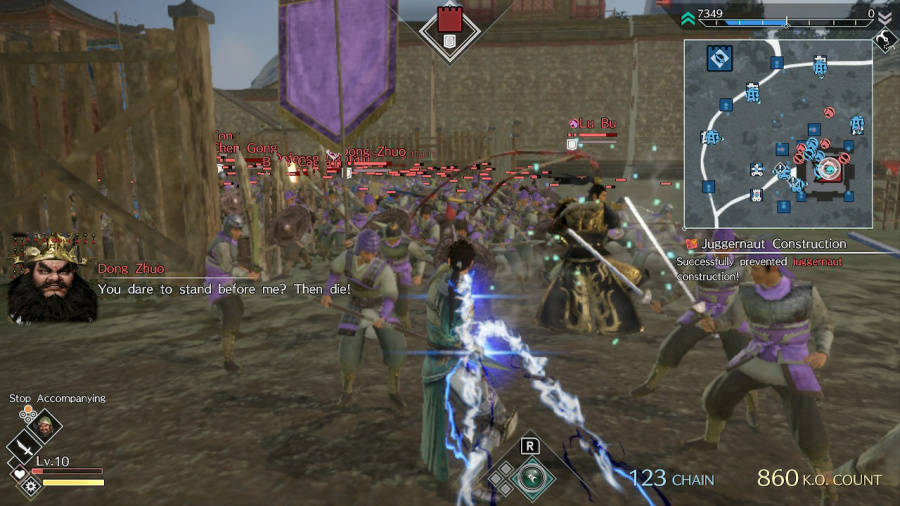 It’s truly tedious, far less engaging and far more repetitive than even hardened Musou fans may be willing to put up with. We’re used to the repetition that’s part and parcel of Warriors games by now, but here all of the elements that keep you hooked in — the characters, the story, the flashy special moves — are tainted by the huge visual downgrade that makes everything look so unappealing, alongside core combat that feels sloppy and unsatisfying. There’s just nothing here to hold your attention, no reason to waste your time planning and plotting when the action it all leads to is so badly executed.

Away from the actual gameplay and the problems continue. There’s no multiplayer options whatsoever here, not even the series’ standard co-op to fall back on, and so a Conquest mode featuring eight scenarios to muck through is all you get at release. The character creation suite is impressively flexible, and we have no doubt some fans will knock plenty of fun out of this aspect of the game, but here too we see a downgrade from past entries in the series, with a real lack of unlockable armours and outfits to play around with owing to the fact Koei Tecmo has decided this stuff should be released as DLC.

Even in terms of how Dynasty Warriors 9: Empires goes about introducing itself, things feel half-assed from the get-go. You’ll get a quick tutorial to show you how to attack in battle, how to utilise your special moves and so on, and that’s it. There’s zero instruction on the strategy side of things. It’s not hard to pick up, it’s super simple stuff at the end of the day, but for newcomers it’s a hugely unwelcoming start and you’ll just need to sit and sift through menus — and constant loading screens — in order to get your bearings. 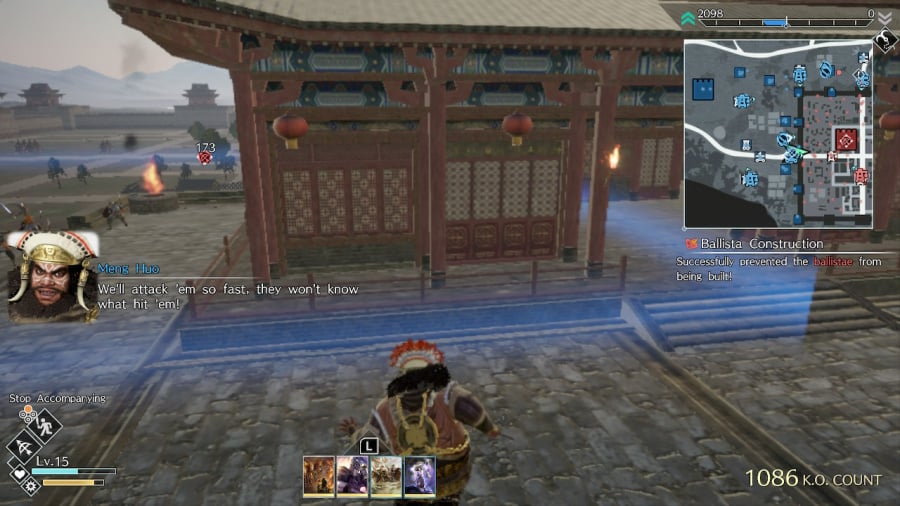 We could go on. There’s a completely useless open-world aspect crowbarred in. You can run around massive empty environments for absolutely no reason during diplomatic strolls. There are tons of re-used assets, cutscenes from previous entries in the series and, in the end, the whole thing just comes off as a sloppy effort that’s been stitched together with the minimum of effort and booted out the door with a premium price-tag attached.

It’s all the more disappointing because, as big fans of the series, we’ve got a real soft spot for some sweet Musou action — no matter how repetitive it gets — but it’s really quite impossible to recommend this latest entry in the Empires spin-off series. Dynasty Warriors 9: Empires is an unsatisfying mess and, by some margin, the worst Musou experience currently available on Nintendo Switch. Die-hard Empires fans who absolutely must have this one on-the-go may be able to stomach it, but everyone else should steer well clear.

Dynasty Warriors 9: Empires is a poor Switch port of a disappointing entry in the long-running spin-off series. This is a hugely downgraded version of the game, with seriously dialled-back visuals failing to put a stop to consistent frame rate issues during the heat of battle. With a lack of gameplay modes, zero multiplayer options, terrible AI and cosmetic customisation options gone AWOL at launch — Koei Tecmo choosing instead to go the DLC route — this is a truly lacklustre package, a bargain bin affair with a premium price tag, and a Dynasty Warriors game you can feel quite comfortable skipping entirely.