Remember the Clockwork Pi GameShell? We covered this open source DIY handheld in 2018, mainly because it resembled a Game Boy and could run MAME, Game Boy Advance and NES titles. It raised $290,429 on Kickstarter and we really enjoyed tinkering around with it – so the news that Clockwork Pi was releasing another, similar product came as music to our ears.

Even so, we perhaps weren’t prepared for what actually turned up in the post; the DevTerm clearly isn’t trying to replicate a Nintendo-made portable or any other handheld games console for that matter; this ‘retrofuturistic’ design is inspired by the TRS-80 Model 100 from 1983, and boasts dimensions of around 209×159mm (that’s not including the Game Boy Printer-like 58mm 200 DPI thermal printer module on the back – yes, it has one of those). It has a full QWERTY keyboard, D-pad, trackball and ultra-wide 6.8″ IPS 1280×480 pixel display, with an aspect ratio of 16:6.

As was the case with the GameShell, the DevTerm comes in pieces and you have to actually put the thing together yourself, Labo-style. It takes around an hour to do, but there’s no soldering required – everything pops together beautifully and it’s quite a pleasant experience if we’re honest. The only catch is that no batteries are included, so you’ll need to source a pair of 18650 lithium-ion cells yourself. 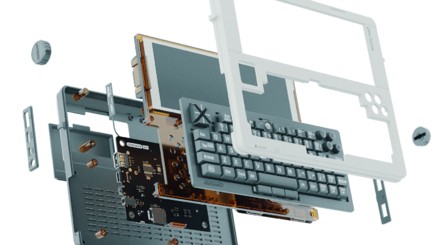 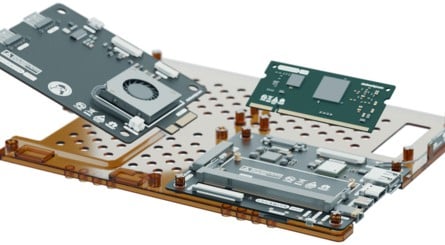 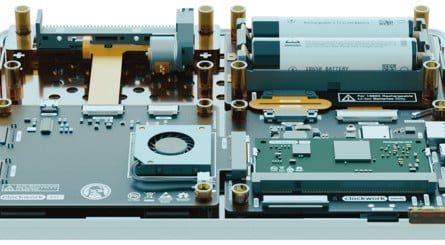 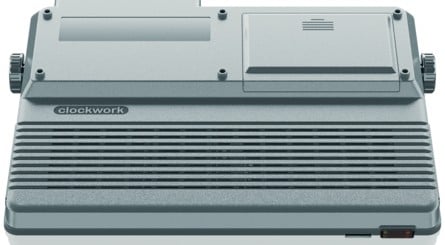 The DevTerm comes in a wide range of different bundles, each with a different chipset providing the power. The base model costs $249, while the top-level spec (which we were sent to play around with) is $339. Storage is handled via a MicroSD card slot, and a 16GB card is included that contains the Linux-based OS. There’s 4GB of LPDDR3 RAM, and both Dual-band 802.11ac Wi-Fi and Bluetooth 5.0 are included.

So what can you do with the DevTerm? Well, unless you’re a fan of programming then its appeal might be limited. The gaming controls work fine, so there’s always the option to take the emulation route (or installed one of the many Pico-8 games it supports), but we’d argue that the real appeal of this system is nostalgia – just as was the case with the GameShell, to be honest.

If you’re of a certain age and remember a time when portable computers were tablet-like slabs of plastic rather than aluminium clam-shells, then this will most certainly scratch an itch. For everyone else, it’s likely to be something of a bizarre technological oddity – but then again, Clockwork Pi’s products carry that perception as a badge of honour.

Thanks to Clockwork Pi for sending the DevTerm used in this feature.