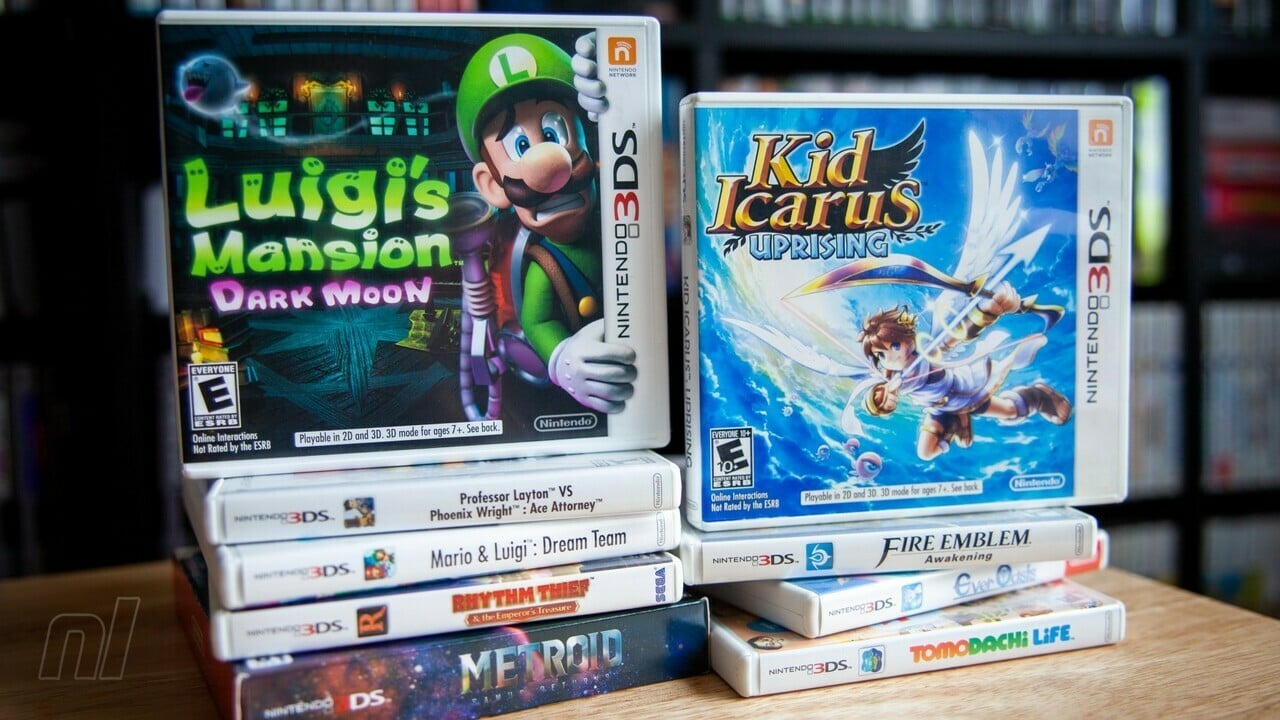 Some 3DS games are super cheap to buy physically, which makes sense considering the success of the system. There are others, however, which have seen their secondhand prices shoot up in recent years. It’s easy enough to find copies of big-selling first-party titles at acceptable prices (even if that means playing near-enough original RRP for your Pokémons), but other games have really shot up in price in a relatively short space of time.

We’ve covered quite thoroughly the digital-only games we think are worth picking up before the 3DS, DSi and Wii U stores close up shop forever in March 2023, but we thought it was worth taking a brief look at the prices of retail games versus their digital counterparts. While it might seem counter-intuitive for lovers of physical media to resort to digital downloads — especially from a store which is soon closing its digital doors — physical prices will only increase once the digital version is no longer available. Pleasantly, it seems that Nintendo has reprinted various retail releases, so you should be able to find the most popular games for a while yet. Still, the clock is ticking, especially for the not-Kirbys and the not-Zeldas.

Stuck between a rock and a hard place, if it’s a choice between never playing a game or grabbing a digital copy, that’s no choice at all for us. If you’ve been waiting to find any of the titles below in pre-owned cartridge form for a reasonable price, we’d say it’s at least worth comparing prices with the digital version before that option is gone forever.

Below we’ve rounded up 10 games that you might want to consider purchasing from the 3DS eShop while you can. We’ve included both the eShop price and an approximate average of the physical cart was taken from pricecharting.com.

Note. We’ve given the prices of PAL region copies in GBP and US versions in USD, both Complete-In-Box. Some of these titles vary in rarity depending on region, with the physical version being cheaper than digital in one region but not the other, so please take the physical prices only as a rough guide.

Also, some of these games are on sale at the time of writing — we’ve made a note of which ones in their respective entries.

Originally released on PS2, this 3DS yet another brilliant instalment in the legendary series. Dragon Quest VIII: Journey of the Cursed King showcases its trademark style with great music, a memorable roster of characters and all the quality-of-life improvements you’d expect with a more modern remake of an RPG classic. Incredibly, this was the first game in the mainline series to launch in PAL regions, and it was also the first to ditch the ‘Warrior’ from the North American version.

Unlike some other games in the franchise, its sprightly pace makes it an excellent choice for new players, too. 200-hour grinds are all well and good, but how are you going to fit in all these other gems?

An island-hopping adventure spanning space and time originally released on PlayStation, Dragon Quest VII is a JRPG masterpiece. If you played the original, this 3DS version is as perfect a remake as you could ask for, with beautiful 3D graphics, a smartly streamlined opening, and lots of welcome quality-of-life updates. This journey through Estard showcases great writing, a fun class system, lovely animations and a stellar soundtrack which make for a fully engrossing adventure throughout. It’s a massive game, but don’t let that scare you off; with short story-style pacing and a huge variety of settings, speech patterns, and scenarios, it feels less like an epic tome and more like a shelf-ful of storybooks stuffed into a little 3DS cart. This game is an absolute pleasure, and a must-play for RPG fans.

Okay, Price Charting disagrees in this case, but we’re going to override it. Following the announcement of Metroid Dread, which sparked renewed interest in this game, finding a copy for under 50 notes became next to impossible, with prices going much higher online.

And it’s easy to see why. The Game Boy sequel to the original Metroid on NES was remarkable back in the day, but if there was ever a perfect candidate for a remake in Nintendo’s back catalogue, that was the one. MercurySteam did a fabulous job updating Metroid II’s mechanics for the 21st century, giving a whole new audience the chance to experience an important chapter in the series’ story. Handy additions like the map were joined with a new melee attack which introduced a delicate balance of risk versus reward and the result was one of the best games on the system.

Time is of the essence with this one, not because physical copies will be like hen’s teeth, but rather access to the Revelation DLC will disappear with the 3DS eShop, so if you want to buy that you’ll have to jump in ASAP.

Fire Emblem may have found itself in a strange spot after the success of Awakening, but Intelligent Systems found a way forward. Actually, two ways — Fire Emblem Fates did a remarkable job delivering what newcomers and long-time players both could possibly want out of this series. Fans of Awakening will dig Birthright‘s continuation of that style of gameplay, and Conquest‘s strategic demands should go over well with series veterans and those looking for more bite from their games.

Each of these games is unique enough to stand on its own accord as an impressive achievement and a whole lot of fun. The writing is sharp and witty, and gameplay is as accessible or as hardcore as you could want it to be. While the story can feel like it’s dragging at times, it’s tough to hold too many grudges against padding since the core loop is so much fun. Extensive campaigns, online multiplayer, and spit-shine polish combined to make for some of the most well-rounded Fire Emblem experiences to date.

A console blessed with an abundance of games, 3DS has done particularly well in the RPG department. This example offers top-shelf dungeon-crawling, a deep battle system that sees you fighting and collecting demons across the elemental spectrum and an excellently written story, not to mention the soundtrack. With so many games and so little time, there’s no shame in Easy mode, either, but Shin Megami Tensei IV is a game to savour for fans or newcomers alike.

Zero Escape: Virtue’s Last Reward spins a fantastic yarn, tackling various topics with maturity, intelligence and even a little humour. Its smart puzzles can be a little fiddly, but if you have any interest in story in games whatsoever and can deal with its murderous subject matter, this is a must play that will keep you engaged for dozens of hours.

Kid Icarus: Uprising is one of the most attractive, exhilarating, entertaining and outrageously fun titles on 3DS. Uprising provides a substantial amount of content, its own brand of adrenaline pumping set pieces and wonderful humour. Arguably awkward controls aside, it sweeps you along at breakneck speed, and is a must-have title for that very reason.

The turn-based series’ debut on 3DS delivered a wonderful feeling of adventure on the handheld. It offers classic, grindy combat in a world of colour that belies the dreariness conjured by the term ‘dungeon-crawler’, and its focus on character classes and team-building means it’s refreshingly light on the tropey narrative arcs you might expect from a game with this subtitle. If you’re after an old-school first person explorer game with a great soundtrack and some modern concessions to convenience and accessibility, Etrian Odyssey IV: Legends of the Titan fits the bill nicely.

Incidentally, Etrian Odyssey IV: Legends of the Titan is just $7.99 at the moment, too.

Monster Hunter Stories is an excellent adventure that channels the colourful world of Capcom’s storied series into a joyous JRPG that saw a sequel come to Switch. It suffers from performance issues on non-New 3DS hardware, but it’s still full of personality, beautifully presented and fun to play, with combat that’s easy to grasp but engaging throughout. Longtime MonHun fans will appreciate Stories as a thoughtfully-made spin-off, but the gameplay template and tone are so different that you don’t need to be familiar with — or even enjoy! — mainline Monster Hunter to have a great time here. Regardless of whether you’ve been hunting Hornetaurs since the beginning or couldn’t tell a Felyne from a Fatalis, Stories is yet another charming 3DS RPG that’s well worth your time.

After such sterling work remaking Ocarina of Time and Majora’s Mask for the system, developer Grezzo showed that it had the chops for original ideas, too. A colourful action-RPG that manages to carve its own space in a crowded genre, Secret of Mana director Koichi Ishii’s fingerprints are all over this game. If you’ve played Zelda to death and some of the other RPGs on 3DS seem a little portentous or gloomy, Ever Oasis could be just what you’re looking for.

And, of course, the Nintendo Selects Line

That’s 10 recommendations we think are worth investigating in digital form, but it’s worth considering the Nintendo Select line of first-party titles which sell for 15.99GBP / 19.99USD.

While these include various million-sellers and absolutely aren’t difficult to find cheap in physical form, buying them digitally means you won’t have to look at copies of classics like Luigi’s Mansion: Dark Moon, Super Mario 3D Land, or Zelda: A Link Between Worlds with that ghastly ‘budget line’ box art. Which is a win.

And let’s face it, Animal Crossing: New Leaf is the sort of daily game that is handy to own in digital form, right?

Those are our picks, but let us know below if you think we’ve missed some gems — there are certainly plenty to choose from.

Oh, and before you say it — no, Metal Gear Solid: Snake Eater isn’t available digitally, unfortunately. Off to ebay with yer!